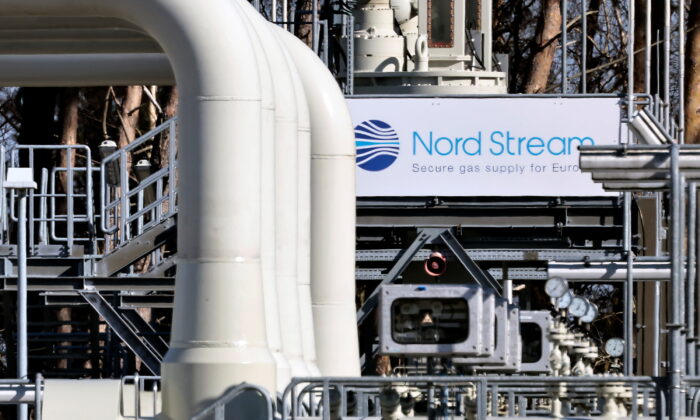 Pipes at the landfall facilities of the 'Nord Stream 1' gas pipeline in Lubmin, Germany, on March 8, 2022. (Hannibal Hanschke/Reuters)
Canada

Ukrainian President Volodymyr Zelenskyy is criticizing Canada for allowing repaired gas turbines to return to Germany, which will be used for Russian gas delivery.

In an address on July 11, Zelenskyy announced that his foreign ministry summoned Canada’s envoy to Ukraine to be admonished over an “absolutely unacceptable exception to the sanctions regime against Russia.”

“This decision on the exception to sanctions will be perceived in Moscow exclusively as a manifestation of weakness,” he said.

“If a terrorist state can squeeze out such an exception to sanctions, what exceptions will it want tomorrow or the day after tomorrow?”

Canada’s Minister of Natural Resources Jonathan Wilkinson said on July 9 that Russia was intent on “further destabilizing” the energy sector in Europe.

Wilkinson said that in that context, the Canadian government has been engaged with partners on the issue of the Siemens turbines currently in Montreal.

“Following these engagements, Canada will grant a time-limited and revocable permit for Siemens Canada to allow the return of repaired Nordstream 1 turbines to Germany,” he wrote in a statement.

The minister said that without proper gas supply from Russia, Germany’s economy and people will suffer.

The new sanctions will “prohibit Canadian services to contribute to the production of goods made by these sectors,” says a GAC statement.

These sanctions add to a long list of measures targeting the Russian economy and officials.

The Epoch Times contacted GAC for comment on Zelenskyy’s summoning of the Canadian envoy but didn’t immediately hear back.

The Conservative opposition has decried the move by the Liberal government, saying that by returning the turbines to Russian state-owned company Gazprom the government is circumventing its own sanctions.

“Instead of circumventing the global sanctions package meant to punish Putin, the Liberal government should approve new pipelines and liquid natural gas terminals so that Canadian natural gas can displace Russian energy supplies in Europe,” Conservative MPs Michael Chong, James Bezan, and Pierre Paul-Hus wrote in a statement on July 10.

The U.S. State Department has backed Canada’s decision, despite citing the need to move away from Russian energy.

“In the short term, the turbine will allow Germany and other European countries to replenish their gas reserves, increasing their energy security and resiliency and countering Russia’s efforts to weaponize energy,” said spokesperson Ned Price in a July 11 statement.

Last month, Gazprom cut the supply of gas through Nord Stream 1 down to 40 percent of the pipeline’s capacity, citing the need for maintenance and the delay in the return of the turbine held in Canada due to sanctions.

Moscow has maintained that the reduction in the supply of Russian gas to Europe is not politically motivated.

“We know that there are issues with turbines, with their maintenance—a turbine is not being returned and was blocked somewhere,” said Kremlin spokesperson Dmity Peskov on June 14. “This is a consequence of sanctions, there is nothing intentional there.”

The pipeline, which runs under the Baltic Sea, transports 55 billion cubic metres of gas every year from Russia to Germany.

The flow has now trickled down to zero for annual maintenance that started on July 11 and is expected to last for ten days.

This has prompted worries in Europe that maintenance could be prolonged for political purposes.

“Based on the pattern we’ve seen, it would not be very surprising now if some small, technical detail is found and then they could say ‘now we can’t turn it on any more’,” German Economy Minister Robert Habeck said in late June.

Germany is currently in stage 2 of 3 in its emergency gas plan, with stage three triggering the rationing of fuel.