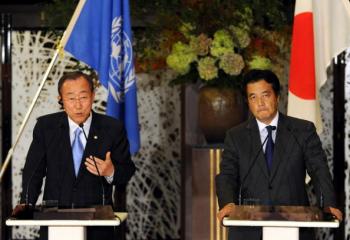 “We must do everything we can to build on the current global momentum toward a nuclear-weapon-free world,” Ban said at a press conference on the first day of his visit in Japan on Tuesday.

He said that last year’s Security Council summit on nuclear disarmament, the extension of the Strategic Arms Reduction Treaty between the United States and Russia, and the summit on nuclear security in Washington in April are positive initiatives for moving toward a nuclear-free world.

Planning to attend the Peace Memorial Ceremony on Aug. 6, Ban will become the first U.N. secretary-general to attend this Hiroshima nuclear attack commemoration. Ban is also scheduled to visit Nagasaki, which was bombed on Aug. 9, 1945, as World War II was coming to an end.

After the attacks, over 200,000 people died of nuclear radiation, shock waves from the blasts, and thermal radiation. Since the end of World War II, more than 400,000 people have died of the bombs’ long-term effects.

Ban said that he wants to use his presence at the ceremony to “send out to the international community a strong message … that we must strive harder to realize a world free of nuclear weapons and proliferation.”