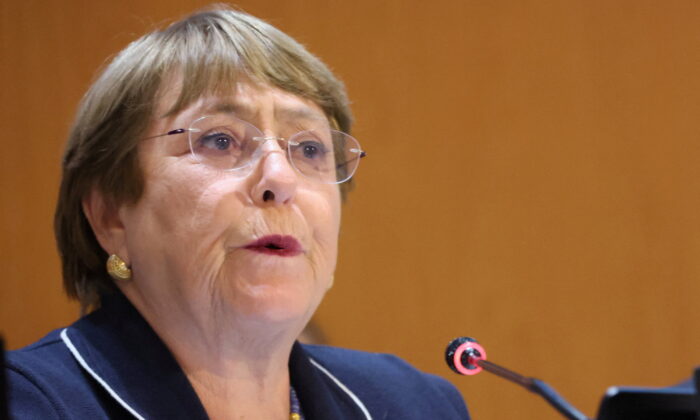 UN Rights Team in China Ahead of Xinjiang Visit

GENEVA—The U.N. human rights office has sent an advanced team to the Chinese city of Guangzhou where they are quarantining ahead of a visit to the Xinjiang region, a spokesperson said on Tuesday.

The team of five which arrived on Monday precedes an expected visit by the U.N. human rights chief Michelle Bachelet initially programmed for May.

Bachelet’s highly-anticipated visit to China will be the first visit by a U.N. High Commissioner for Human Rights since Louise Arbour in 2005. It includes a planned trip to the western region of Xinjiang where activists say some 1 million Uyghurs have been held in mass detention. The Chinese regime rejects accusations of abuse in Xinjiang.

“Once out of quarantine (the team) will conduct their preliminary technical mission, including a visit to the Xinjian Uyghur Autonomous Region,” spokesperson Liz Throssel said in an emailed response to Reuters.

Throssel did not provide further details on the timing of Bachelet’s visit which would be held after the advance team has completed their work. The team’s quarantine, a requirement under Chinese rules amid the spread of COVID-19, was initially programmed for three weeks, she added.

The U.N. rights chief is also preparing a report on alleged abuses against Uyghurs which her office has been working on for more than three years.