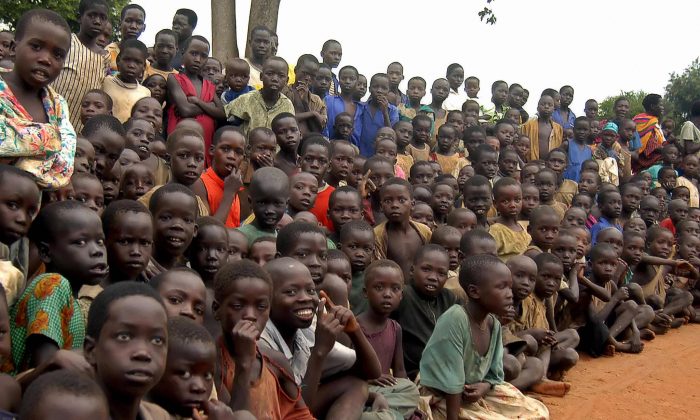 Ugandan children at a refugee camp in nothern Uganda during a visit by the U.N. Humanitarian Co-ordinator John Holmes, on May 15, 2007. (Peter Busomoke/AFP/Getty Images)
Opinion

NEW YORK—As world leaders convene for the U.N. Sustainable Development Summit in New York, to reflect on the progress of the Millennium Development Goals set in 2000 and adopt more goals for 2030, they ought to focus on the elephant in the room—a swelling global population that weighs on sustainability of social, economic, and environmental development.

A swelling global population that has tripled since 1950, with a record high of 7.3 billion people, should not be overlooked in setting new international development goals.

According to the summit’s draft Declaration of the Sustainable Development Goals, the heads of state and government and high representatives resolve before 2030 “to end poverty and hunger everywhere; to combat inequalities within and among countries; to build peaceful, just and inclusive societies; to protect human rights and promote gender equality and the empowerment of women and girls; and to ensure the lasting protection of the planet and its natural resources.”

To achieve these lofty aims, the agenda includes a diverse set of topics, including 17 specific developmental goals and a broad range of 169 targets. Yet, population growth is not mentioned among the goals nor the targets.

Over the past 15 years, world population increased by 1.2 billion people and is now at a record high of 7.3 billion. During that time period, the population of the least developed countries grew nearly 10 times as fast as the more developed countries. The U.N. Population Division anticipates another billion by 2030 and at least 11 billion by the end of the century.

The UN Population Division anticipates another billion by 2030 and at least 11 billion by the end of the century.

While the average annual rate of natural increase—births minus deaths—of the least developed countries is 2.5 percent, the rates among some of the poorest countries are in excess of 3 percent, which translates into a population doubling time of less than 25 years. Most of this growth is in Africa: The populations of Burundi, Chad, Niger, Somalia, and Uganda, for example, are expected to double by 2040. The countries projected to increase at least five-fold by 2100 include Angola, Burundi, Democratic Republic of Congo, Malawi, Mali, Niger, Senegal, Somalia, Uganda, Tanzania, and Zambia.

In contrast, the average annual rate of natural increase of the more developed countries is about one-tenth of one percent. In addition, with the numbers of deaths outnumbering births, some 18 developed countries are experiencing negative rates of natural increase, including Germany, Greece, Hungary, Italy, and Japan. Immigration is the only alternative to fertility for population growth. In the absence of sufficient compensating immigration, the populations of these aging countries as well as those of 20 others are projected to be markedly smaller by 2030.

Many countries in various regions of the world have already passed through the demographic transition achieved by both low birth and death rates. At present nearly 80 countries, representing close to half of the world’s population, have fertility rates at or below the replacement level of about two children per woman. In contrast, about 21 countries, accounting for about 9 percent of the world’s population, have fertility rates of five or more births per woman.

Slower population growth rates will give those countries more time to adjust to future population change. This in turn will strengthen their abilities to expand their economies, improve living conditions, educate youth, develop infrastructure, and protect environments.

There is not a single issue among the sustainable development goals that would not benefit from reducing high rates of population growth.

There is not a single issue among the sustainable development goals—including poverty, hunger, housing, education, employment, health, gender equality, human rights, and environment—that would not benefit from reducing high rates of population growth. Lower rates of population growth among the least developed countries would also contribute to improving economic and employment prospects, while easing environmental stresses, thus reducing the pressures for young men and women to migrate to other countries to secure a decent standard of living.

Moreover, if fertility rates in the least developed countries were to decline faster than currently projected in the United Nations medium variant projection, the difference in population by the century’s close could be close to a billion people less, 2.2 billion versus 3.2 billion. Such a sizeable demographic difference would contribute to early stabilization of the world’s population.

As has been the case at previous global summits, world leaders will briskly walk into the U.N. General Assembly and deliver 10 minutes or so of largely forgettable prose. It would indeed be memorable if at least one leader recommended that the international community work together to address high rates of population growth.

In 15 years, the world population will have gained another 1.2 billion people and grow to 8.5 billion people. By then, nearly all of today’s political leaders will have either retired, been removed, or passed away. Their replacements will address the U.N. Development Summit in 2030—and by then, may find the courage to ask why rapid rates of population growth were repeatedly ignored for so long—and recommend that population growth be included in any future set of international development goals.

Joseph Chamie is an independent consulting demographer and a former director of the United Nations Population Division. Copyright © 2015 YaleGlobal and the MacMillan Center. This article was previously published on Yaleglobal.yale.edu