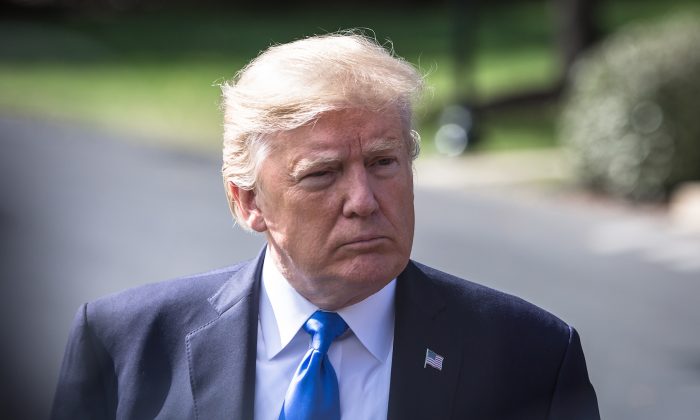 The United Nations has confirmed that the Assad regime in Syria used chemical weapons on civilians in April, validating the Trump administration’s decision to launch retaliatory airstrikes on an Assad airbase.

The Assad regime killed more than 100 people with sarin chemical weapons on April 4 in the Syrian town of Khan Sheikhoun, and many of the victims were women and children. The Trump administration rapidly responded to the attack by launching close to 50 Tomahawk missiles from warships in the Mediterranean Sea, which struck an Assad airbase in Homs.

The Assad regime denied it was behind the attack, and Russia, which is Assad’s main backer, also defended Assad’s position at the United Nations. At the time, the strikes on the Assad airbase were the strongest direct U.S. action in the six years of the war in Syria.

On Oct. 26, however, the United Nations released a report that “concluded with confidence that the Assad regime used the chemical weapon sarin on April 4, 2017, in Khan Shaykhun, killing more than 100 of its citizens, many of whom were children and women,” says a Nov. 2 statement from White House Press Secretary Sarah Sanders.

The investigation was conducted by the Organization for the Prohibition of Chemical Weapons Joint Investigative Mechanism (JIM), which is an independent, technical body established by unanimous vote of the U.N. Security Council.

Sanders said, “This unconscionable attack marks the fourth time that the JIM has confirmed that the Assad regime used chemical weapons, underscoring the brutal and horrifying barbarism of Bashar al-Assad and making the protection provided by Russia even more egregious.”

Russia has blocked the U.N. Security Council eight times from holding nations accountable for using chemical weapons, including the Assad regime, and is attempting to block the JIM investigation as well.

Sanders said during an Oct. 24 press conference that, “By blocking the extension of the Joint Investigative Mechanism, Russia has once again demonstrated it does not care about stopping the barbaric use of chemical weapons in the world and will do whatever it takes to protect its ally, the Assad regime.”

Sanders said the move by Russia was equivalent to an endorsement “of the Assad regime’s use of chemical weapons against innocent women and children. We will continue to push back against this.”

With the release of the U.N. report, the Trump administration’s stance was given more weight. Sanders came out more strongly against Russia’s attempts to undermine or eliminate the JIM, and said it shows “a callous disregard for the suffering and loss of life caused by the use of chemical weapons and an utter lack of respect for international norms.”

“All those who use chemical weapons must be held accountable,” Sanders said. She added that the United States is pressing the U.N. Security Council to renew its mandate of the JIM so that it can continue to identify nations behind such attacks, “and send a clear message that the use of chemical weapons will not be tolerated.”

“Countries that fail to support the work of the independent investigators stand in direct opposition of all standards of reasonable international conduct,” she said.

While explaining the U.S. stance on Iran, President Donald Trump said on Oct. 13 that ” In Syria, the Iranian regime has supported the atrocities of Bashar al-Assad’s regime and condoned Assad’s use of chemical weapons against helpless civilians, including many, many children.”

In 2013, after the Assad regime launched an earlier attack on rebel forces and civilians using sarin gas, a former NSA agent told The Epoch Times that Assad’s chemical weapons programs had been assisted by Russia, China, Iran, Iraq, and North Korea.

“They’re getting a lot of shipments from both China and Russia,” said Terry Minarcin, a retired NSA agent, in an earlier interview. He added that since the Iran-Iraq War in the 1980s, the Soviet Union and later Russia, had sent shipments of chemical and biological weapons to Syria, Iraq, and parts of Lebanon.

“China became involved because they were the go-between for North Korea and Iran for the development of missiles, and later on for some of the technology for making nuclear weapons,” he said.

A 2013 report from the nonpartisan Congressional Research Service also said the Assad regime had stocks of sarin nerve gas and mustard gas, which were “possibly weaponized into bombs, shells, and missiles, and associated production facilities.”