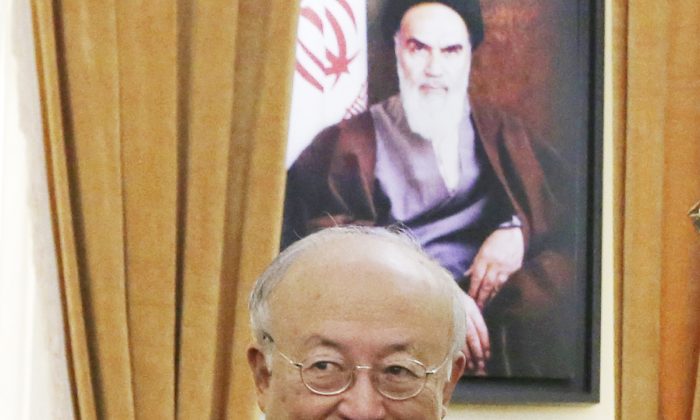 FILE - In this July 2, 2015 file photo, U.N. nuclear chief Yukiya Amano stands as Secretary of Iran's Supreme National Security Council Ali Shamkhani shakes hands with delegation members before the start of their meeting in Tehran, Iran. Iran's state TV is reporting Amano has arrived in Tehran, to "clarify past and current issues" of the country's nuclear program. Iran and the world powers have agreed to a landmark deal that curbs Iran's nuclear program in return for the lifting of international economic sanctions. (AP Photo/Vahid Salemi, File)
Middle East

TEHRAN, Iran— Iran’s President Hassan Rouhani told the United Nations’ nuclear chief Yukiya Amano on Sunday that his agency should be fair in its implementation of a nuclear deal reached between Iran and the world powers, according to a report on Rouhani’s website.

Amano arrived in Tehran earlier in the day to discuss outstanding issues; it was Amano’s second visit to Iran in the past three months.

The Iranian president also reiterated that Iran has no intention of developing a nuclear weapon. “Over the past years and during monitoring and snap inspections by the agency (it is) persisted that Iran has had no diversion from its peaceful nuclear program,” he said.

Amano replied that his agency’s work in Iran and elsewhere is “based on impartiality and persisting on facts.”

Amano’s visit comes less than a month before an Oct. 15 deadline to gather information on allegations that Iran had in the past tried to build atomic weapons. A final U.N. assessment is due in December.