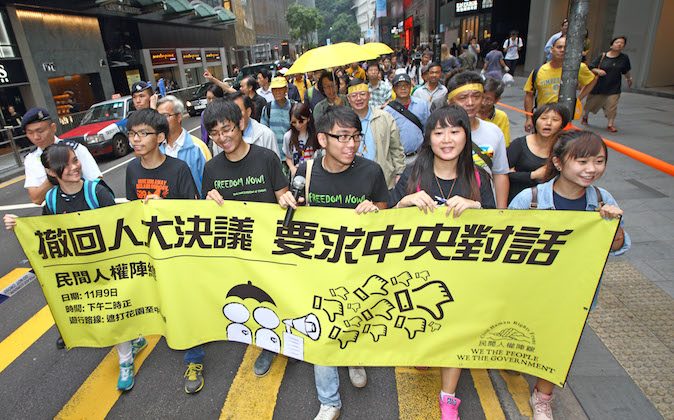 On Sunday, Hong Kong pro-democracy protesters marched to Chinese government’s offices to demand direct talks with Beijing over democratic reform in the city.

About 1,000 protesters carried out a “yellow ribbon” march from a park in Hong Kong’s central business district to Beijing’s liaison office several miles away.

The student-led demonstrators carried banners with the words “We demand dialogue with the central government,” as well as the now iconic “Lion Rock” banner that reads “I want true universal suffrage.”

The Hong Kong Federation of Students (HKFS), a prominent student body at the forefront of a leaderless pro-democracy movement, have decided to directly engage Chinese regime officials in Beijing after earlier talks with the Hong Kong government failed to break the impasse.

The protesters are demanding full democracy for the city’s Chief Executive elections in 2017. Presently, Beijing selects two or three candidates for a 1,200 pro-Beijing elections committee to select.

During the student-government dialogue on Oct. 21, the Hong Kong government backed the Standing Committee of the National People’s Congress’s Aug. 31 decision to stick to the current Chief Executive elections arrangement in 2017, despite the HKFS student representatives’ impassioned pleas.

The Hong Kong government also agreed to send a report to Beijing about the recent events and suggest that both Hong Kong and China set up a committee to discuss political reform in Hong Kong beyond the 2017 Chief Executive elections, but this proposal received lukewarm response from the demonstrators.

After a period of indecision, the HKFS leaders settled on seeking an audience with Beijing after the Asia Pacific Economic Cooperation (APEC) meetings. APEC is being held in China this year and will run from Nov. 9 to Nov. 11.

At Sunday’s “yellow ribbon” march, Joshua Wong, a teenage activist who is one of the most recognized faces of the Umbrella Movement, said: “Students were showing good faith that if the Hong Kong government can’t handle this, why don’t we get in touch with the central authorities to discuss whether or not we can narrow the differences.

“But so far, we’ve been given the cold shoulder.”

When the pro-democracy protesters arrived at the China liaison office, they tied yellow ribbons, one of the movement’s symbols, on the metal barricades outside the building under the watchful gaze of police officers.

Some Hong Kong government supporters also showed up to confront the protesters, but no significant incidents occurred.