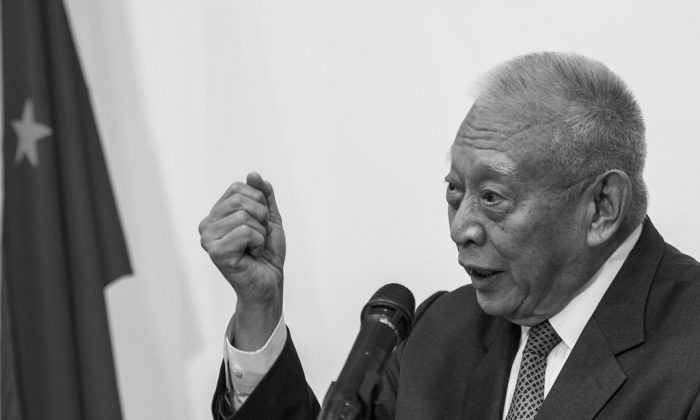 In view of recent pro-democracy demonstrations, a Hong Kong deputy to China’s faux legislature and a former Chief Executive are backing the introduction of Chinese security laws in the city.

Stanley Ng, a National People’s Congress (NPC) deputy and head of the influential Hong Kong Federation of Trade Unions, is proposing the application of national security law in Hong Kong until Article 23—a controversial anti-subversion law—is passed, according to local media.

While Britain returned control of Hong Kong to Beijing in 1997, the Basic Law—Hong Kong’s governing document—states that the semiautonomous city will handle its own legislation.

In an interview with local radio station Digital Broadcasting Corporation (DBC), Ng said his decision was inspired by the student-led pro-democracy protests—dubbed the Umbrella Movement by supporters—and the academic debate on Hong Kong independence.

It can’t be done through a back door.
— Dennis Kwok, Hong Kong lawmaker

For almost three months, protesters held key roads in the Asian financial hub to demand fuller democracy. About 1.2 million Hongkongers—a sixth of the city’s population—were estimated to have joined the peaceful protests.

Self-determination is also a hot topic in recent years, particularly among academics and students. The scholarly fraternity feels that Beijing can no longer be trusted to properly implement democratic reform outlined in the Basic Law.

In a press conference on Tuesday, Tung, who is now the vice-chairman of the Chinese People’s Political Consultative Conference—the Chinese regime’s top advisory body—stressed that China’s “national sovereignty and security” cannot be jeopardized.

Beijing, Tung added, has the “power to introduce mainland legislation into Hong Kong.”

But Dennis Kwok, the legal profession’s representative in the legislature, disagrees with Tung’s reading of the city’s mini-constitution.

“What [Tung] said was highly inappropriate, and also inaccurate; really very wrong indeed,” Kwok told Radio Free Asia. “It’s up to the people of Hong Kong to decide when to legislate, and how to legislate.”

“It can’t be done through a back door,” Kwok added.

By amending an annex in the Basic Law, the Standing Committee of the NPC (NPCSC) can technically pass Chinese laws in Hong Kong.

But a member of the local legislation advisory group begs to differ.

Albert Chan, a law professor at the University of Hong Kong, said in a DBC radio programme Tuesday that the NPCSC must consult the Basic Law Committee before it can introduce state legislation in the city.

Under the Basic Law, Hong Kong enjoys liberal institutions such as a free press and an independent judiciary that upholds the rule of law, privileges not found on the mainland.

However, “mainland China’s national security laws, like secession and treason, are rather stringent and were probably deemed not applicable to Hong Kong when the Basic Law was being drafted,” Chen explains.

Hence, it was agreed that Hong Kong will deal with its own legislation so that “laws that respect freedom and human rights” can be passed.

The Hong Kong government is currently not considering Ng’s proposal.

Chief Executive Leung Chun-ying claims that he does not know the specifics of the NPC deputy’s plan.

“The SAR government is not looking into the issue nor does it have any plan to move for the legislation in accordance with Article 23 of the Basic Law,” said Leung.

When Article 23 was tabled in 2003 under Tung’s government, half a million Hongkongers, fearing a curb on their rights and civil liberties, protested in the city’s largest rally on July 1.

The bill was eventually shelved indefinitely, and is believed to be one of the factors influencing Tung’s resignation halfway into his second term in 2005.

Leung, who is hugely unpopular, has stated on numerous occasions that he will not address the enactment of Article 23 during his first term in office.