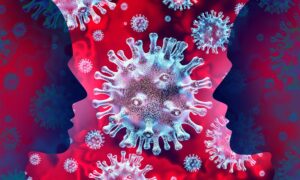 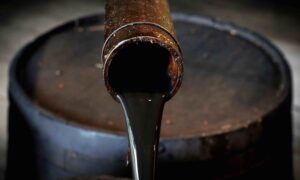 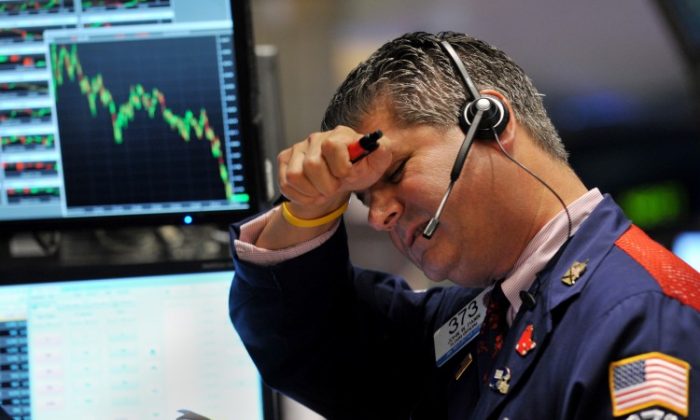 A trader works on the floor of the New York Stock Exchange on Aug. 4, 2011. (Stand Honda/Getty Images)
Viewpoints

With markets crashing down—and up—seemingly every other day, the only certainty in the markets right now is that there’s none to be found, anywhere in the world.

In Asia, stock markets continued to fall as the economic fallout from coronavirus spreads deeper and wider across the region. In Europe, the Stoxx 600 dropped 6 percent, while oil and gas sector stocks plunged about 15 percent.

There’s little reason to imagine that U.S. markets won’t be similarly impacted. In fact, they already have and will continue to be.

The Dow Jones Industrial Average fell 1,884 points at opening on Monday. The news for the S&P 500 isn’t any better.

Futures on the S&P 500 were halted Sunday night as a 5 percent drop triggered “circuit breakers”—safety measures—intended to thwart deep declines. The trigger levels are based on the value of the index at the prior day’s close.

Of course, a futures steep selloff typically means that the markets will likely see a major decline in the next trading day. That is, unless contrary news presents itself.

The decline in the S&P 500 index, indeed, reached the 7 percent threshold Monday, pausing trading for 15 minutes to break the selloff’s momentum. That’s known as a Level One threshold.

The next 15-minute trading break for the S&P 500 index—a Level Two threshold—will be triggered at a 13 percent decline relative to the prior trading day’s close. If the threshold is breached by or after 3:25 p.m., however, no halt in trade will be triggered.

At a 20 percent selloff of the S&P 500 index, however, no matter what time in the trading session, will trigger a Level Three event. This will result in trading being halted for the remainder of the day, regardless of what time it occurs.

A Variety of Market Shocks

The shocks to the global equity markets are serious and growing in variety. The coronavirus shock is still unfolding as it makes its way westward. It’s disrupting economies throughout Europe and the Middle East, with Italy particularly hard hit.

As of yesterday, with a death toll of 366, Italy has put 25 percent of its population under quarantine, mainly in the north, which includes the country’s financial district. The quarantine is expected to last until April 3.

Meanwhile, in the Middle East, Iran has been especially impacted, but Israel and other countries have been hit with outbreaks, disrupting or threatening to disrupt economic activity. Further market selloffs are more likely than not, and a halt in trading lasting one day or several is easily a possibility.

Of course, millions of market investors, pensions, and 401K plans are feeling the pain of this major correction that everyone knew had to come sooner or later. The impact of coronavirus, of course, bears much of the immediate blame, and perhaps rightly so.

And, although the outbreak certainly triggered crashing equity prices, other events had already destabilized the markets. The Hong Kong crisis, for example, as well as the trade war, had already weakened confidence in Asian markets and supply chains, particularly in China.

But the trade war also hurt the U.S. economy as well.

U.S. market confidence was also shaken by both of those events, as well as by political instability around the impeachment of President Donald Trump. What’s more, the unprecedented level of division in this year’s election season has not been much of a confidence builder, either.

But in addition to the coronavirus pandemic, the potential outbreak of oil wars between Russia and Saudi Arabia is a powerful negative driver as well. Oil prices cratered by 20 percent after OPEC failed to come to an arrangement regarding output pricing.

As a leader in low-cost oil production, Saudi Arabia wanted to coordinate production levels to maintain prices. But failing to get an agreement, they slashed prices to undercut Russian producers as well as American shale oil producers. This has added downward pressure on oil and gas stocks around the world.

Opportunity Is There, Too

But it’s not all bad news.

This massive correction will flush out over-valuations in the market. It may also permanently damage China’s economy, a major competitor to the United States, benefiting America over the long term. And, for traders, such high volatility presents fantastic opportunities to make terrific profits. Stock prices, as every trader understands, fall faster and further than they ever rise.

What’s more, as uncertainty surrounding the coronavirus outbreak diminishes with a vaccine in sight within the next few months, some market rebounds are likely. But in the meantime, as both uncertainty and instability rise, the demand for relative security and stability will rise, too. That goes for everything from market assets to supply chains and where people want to either leave or live.

These factors may ultimately play into America’s favor.