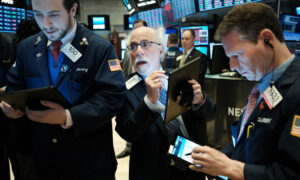 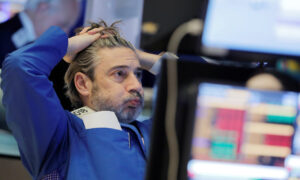 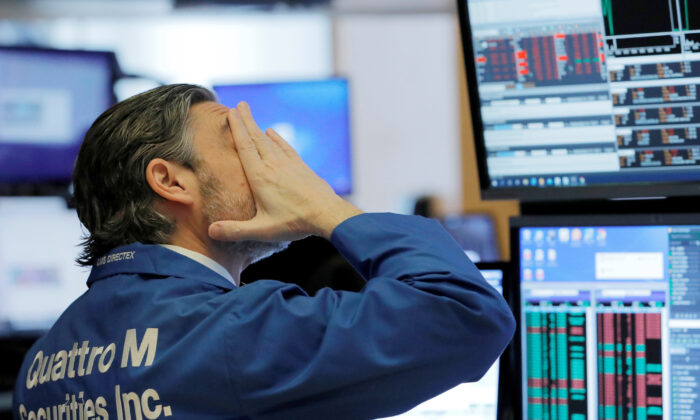 A trader works on the trading floor at the New York Stock Exchange in New York City on March 5, 2020. (Andrew Kelly/Reuters)
Business

Wall Street’s main indexes melted after markets opened Monday, with the Dow Jones Industrial Average (DJIA) falling by over 2,000 points, sparked by the worst one-day crash in crude oil prices in 30 years after an alliance between OPEC and Russia imploded, and Saudi Arabia announced it would cut crude prices and increase production.

A 7 percent plunge in the S&P 500 triggered an automatic 15-minute halt on trading at the New York Stock Exchange (NYSE), one of three circuit breakers designed to prevent a more serious market meltdown. The other NYSE trading curbs kick in at 13 percent and 20 percent.

The losses, which retraced several percent in subsequent trading after the curb was lifted, came amid continued investor anxiety about the oil price war and the global spread of the new coronavirus.

The Wall Street “fear gauge,” or the VIX volatility index, which is a measure of implied market swings, shot up to nearly 60 on Monday, a level not seen since the 2008 financial crisis. A reading above 31 is considered in highly volatile territory, with extreme levels of investor fear and uncertainty.

The move has been widely reported as an overt bid to wrest market share away from Moscow after talks between Russia and the Organization of the Petroleum Exporting Countries (OPEC) failed to agree on production cuts amid a coronavirus-driven collapse in oil demand.

The lower activity will remain “until we see clear signs of commodity price recovery,” said Diamondback Chief Executive Travis Stice. “We will maintain positive cash flow and protect our balance sheet and dividend,” he said.