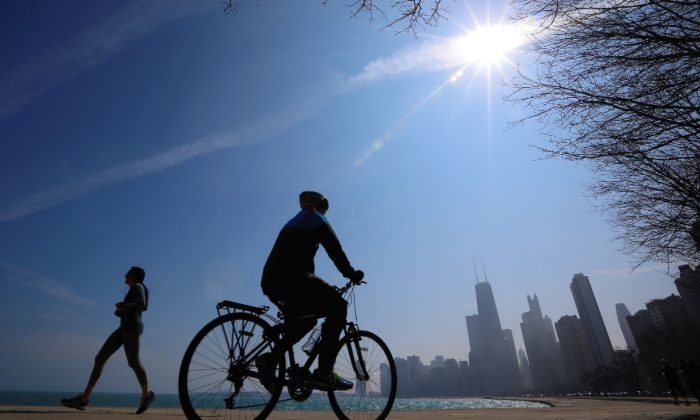 A jogger and a cyclist make their way around Lake Michigan in Chicago, March 21, 2014. (Jim Young/File Photo via Reuters)
Sports News

LONDON—Riding a bicycle round and round a velodrome non-stop for 24 hours sounds like a form of penance but for 48-year-old James MacDonald it is just another extreme two-wheeled challenge that needs to be crossed off his list.

Systems engineer MacDonald will roll off the start line at Newport’s Geraint Thomas National Velodrome in Wales around midday on Saturday and plans to cover more than 941.873km (about 585 miles) by the time he comes to a standstill at the same time on Sunday.

To break the velodrome 24-hour distance record set by Austrian ultra-cyclist Christoph Strasser in 2017—a 3,767-lap grind after which he vowed never to ride on a track again.

“It’s about trying to see what your limits are,” MacDonald, who already holds the world record for the fastest return cycle ride between Land’s End and John O Groats, told Reuters.

“I thought I would try something a bit harder and see if it’s possible. It’s about understanding your capabilities. I’m rubbish at ball sports, and can’t run, but I can ride a bike.

“The 24-hour record is the ultimate thing to achieve.”

Incredibly, MacDonald’s record attempt might only be successful if he can limit toilet stops to the absolute minimum—preferably none at all as he will need to keep his average speed at around an eye-watering 40kph mark.

“Stopping is the worst thing you can do for your average speed, stopping is just terrible,” he said.

How can @Meraki technology help a cyclist beat a world record?🚴‍♂️ Cisco’s James MacDonald has the answer 👉 https://t.co/8rhZ9CsPt5 pic.twitter.com/CT8qIlLclF

“We will try to make sure there are no stops. It’s a balance between hydration and having to go to the toilet. If we manage it correctly I shouldn’t have to stop. But we might not get it perfect. But we’ll keep it to the absolute minimum.”

MacDonald will consume around 10,000 calories and 15 liters of fluid during his attempt—but the dry air of the velodrome means digesting anything other than liquid will be impossible.

His diet will be energy gels, baby food and Greek yoghurt.

As well as the obvious physical hardship, the monotony of lap after lap after lap on the wooden boards is the other challenge that he will have to overcome.

“The first part in terms of comfort is just something you have to live with,” MacDonald, whose day job is as a systems engineer for technology firm Cisco, said. “I’ve ridden 24 hours non-stop before but when you’re on the road you have little breaks when you’re rolling downhill, you can sit up.

“But on the track, there is very little variety. Unfortunately, it’s a never-ending road.

“That’s when the crew will be so vital. Not only will they be able to tell me what’s happening to my body, how fast I’m going, etc, they’ll keep me entertained.

“We’ll be playing music, and talking and that’s really important, being in contact with the crew.”

MacDonald, who once rode across the width of the United States non-stop in 11 days, will ride a similar bike to the one used by Australian Rohan Denis for the hour-record attempt in 2015 and be backed-up by a team of analysts led by Tim Wade, Senior Director of Architecture at Dimension Data.