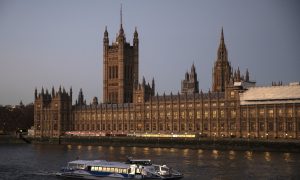 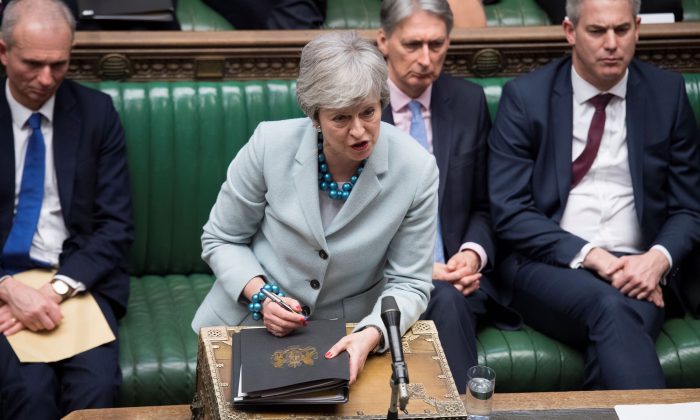 LONDON—British Prime Minister Theresa May will address her Conservative lawmakers on March 27, possibly to set out a timetable for her departure in a last throw of the dice to win support for her twice-rejected Brexit deal in parliament.

At her weakest after parliament on March 25 seized control of Brexit, May has yet to give up hope of winning approval for her deal to leave the European Union, which she says is the only way of ensuring an orderly exit that will protect the economy.

Parliament’s move seemed to have focused minds, with some eurosceptic lawmakers saying they could back her plan before choosing a new leader for the next phase of talks with the EU. But as yet her Northern Irish powerbrokers remained opposed.

One Conservative lawmaker said May’s decision to address the party’s so-called 1922 Committee at 5.00 p.m. GMT (1:00 p.m. EDT) on March 27 suggested she could set her date of departure to win over that support.

But others cast doubt on whether May, who has so far weathered at least two attempts to oust her, would commit to stepping down without a firm guarantee of support for her deal.

Nearly three years after the 2016 EU membership referendum, and three days before Britain was originally supposed to leave the bloc, it remains unclear how, when or even if Brexit will take place, with parliament and the nation deeply split.

May could try to bring her deal back to parliament on March 28 for a third vote on Britain’s biggest trade and foreign policy shift for more than 40 years, but her spokesman said the government would only do that if it had a chance of winning.

Her cabinet team of ministers met on March 26, digesting March 25’s votes but also trying to plot a way of winning over the 75 lawmakers it must convince to get the so-called Withdrawal Agreement negotiated with the EU through parliament.

“They had a long discussion both in relation to the votes which took place last night and on the work which is ongoing to build support for the government’s deal to allow us to leave the EU in an orderly way as soon as possible,” the spokesman said.

“If we are able to hold and win a vote this week we would then be able to leave the EU in less than two months’ time with a deal, which the prime minister firmly believes is what the public wants,” he said.

The spokesman said May would “engage constructively” with lawmakers who seized control of Brexit in parliament on March 25 but gave them a warning—there is no point supporting different options that the EU will not negotiate.

Lawmakers will debate the alternative Brexit options on March 27 before holding so-called indicative votes from 7.00 p.m. GMT (3.00 p.m. EDT). They will be able to support as many options as they like, with the result expected after 9.00 p.m. GMT (5.00 p.m. EDT).

The votes could indicate there is no majority in parliament for any alternative course of action, or else a majority for several. Lawmakers plan to take control of parliamentary business again on April 1 to further narrow down the options.

By the evening of March 26, several proposals had emerged for March 27 voting.

Under a separate cross-party proposal, parliament would choose between leaving the EU without a deal or stopping Brexit altogether if they were the only two options left, Jo Maugham, a lawyer and campaigner, said.

The threat of a softer Brexit or long-delayed departure was focusing minds among hardline Brexiter critics of May’s deal.

“If we vote it down again, there is an appreciable and growing sense that we will not leave at all, that is the risk,” Johnson was quoted as saying.

Northern Ireland’s Democratic Unionist Party (DUP), which props up May’s government, said it had not changed its position after Sky News reported its lawmakers would prefer a long delay to allow for a change of leader and a new deal.

The government has said the deal May agreed with the EU in November remains the best way to leave the bloc and Brexit minister Stephen Barclay has warned parliament it might be on the way to forcing a new election.

“The bottom line is that something has got to change,” said Steve Brine, who quit as a junior health minister in May’s government in order to vote against her on March 25.

“We are stuck in this maddening impasse where we go round and round in circles—something has to move us forward. The House of Commons is not going to come up with something completely crazy.”