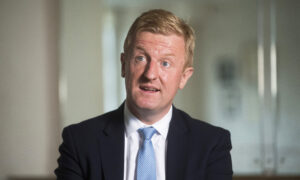 The UK government on Wednesday published the draft of a new “landmark” internet bill to regulate online space.

The ambitious new bill (pdf), which is expected to be brought before Parliament in the coming months, is set to be the first major set of regulations for the internet anywhere in the world.

It aims to protect people from “harmful content” as well as to “uphold democratic debate online,” according to a government statement.

But Civil liberties groups have criticised the bill, calling it “Kafkaesque” and “disastrous for privacy rights and free expression online.”

The new Online Safety Bill introduces a “duty of care,” requiring social media sites, websites, apps, and other services hosting user-generated content or allowing people to talk to others online to “remove and limit the spread of illegal and harmful content such as child sexual abuse, terrorist material, and suicide content.”

According to the government statement, the bill also seeks to tackle “racist abuse,” scams, and “disinformation.”

The UK’s communications regulator Ofcom will have the power to fine companies up to £18 million ($25 million) or ten percent of annual global turnover, whichever is higher, and to block access to sites if the companies fail their “duty of care.”

If companies still “don’t step up their efforts to improve safety,” a new criminal offence may be introduced for senior managers.

To uphold democratic debate online, companies will also be required to protect content defined as “democratically important,” safeguard users’ access to journalistic content shared on their platforms, and are forbidden to discriminate against particular political viewpoints.

Ofcom will set out codes of practice for companies to protect freedom of expression, which may include having human moderators to deal with “complex cases” that could be falsely flagged by AI moderation technologies.

Companies will be required to be upfront about their policy and ensure it is applied consistently, and give users “effective routes of appeal for content removed without good reason.” Users will also be able to appeal to Ofcom.

Companies will also need to conduct and publish up-to-date assessments of their impact on freedom of expression and demonstrate they have taken steps to mitigate any adverse effects.

Campaign groups suggested that the new rules proposed are too vague and could lead to free speech being eroded.

“Treating online speech as inherently dangerous and demanding that risks are eliminated under the threat of massive fines is only going to end up in over-reaction and content removal,” Jim Killock, executive director of Open Rights Group said in a statement.

“This is a flawed approach which makes no attempt to bring law breakers to justice. Instead, it tries to put the problem solely on the shoulders of platforms. But Facebook is not the police and does not operate prisons,” Killock said.

“It also pushes for lawful content, including in private messages sent through these platforms, to be monitored and scoured for alleged risks. The idea that private messages should be routinely checked and examined is extraordinary,” he added.

“This is a litmus test for the Conservative Party and the Prime Minister over how committed they are to the principles of free speech.”

“The Online Safety Bill introduces state-backed censorship and monitoring on a scale never seen before in a liberal democracy,” Mark Johnson, legal and policy officer at Big Brother Watch, said in a statement.

“This Bill is disastrous for privacy rights and free expression online. The Government is clamping down on vague categories of lawful speech. This could easily result in the silencing of marginalised voices and unpopular views,” Johnson said.

“Parliament should remove lawful content from the scope of this Bill altogether and refocus on real policing rather than speech-policing.”

The Epoch Times has reached out to the Department for Digital, Culture, Media & Sport for comment.