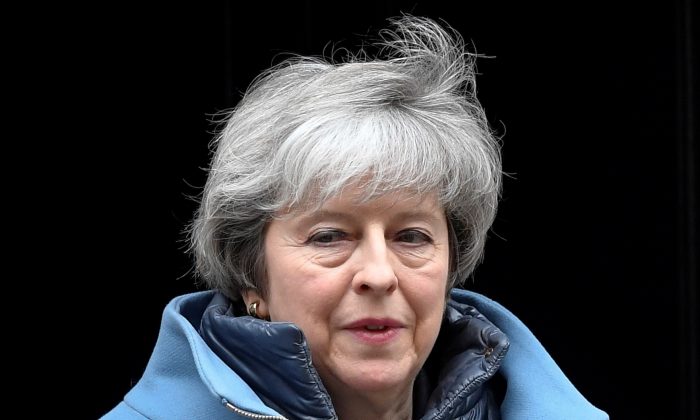 UK’s May Tells Lawmakers: Hold Your Nerve on Brexit Deal

LONDON—Prime Minister Theresa May told lawmakers Feb. 12 to hold their nerve over Brexit and give her more time to negotiate a deal acceptable to both the European Union and the British parliament.

The United Kingdom is on course to leave the European Union on March 29 without a deal unless May can convince the bloc to amend the divorce deal she agreed last year and get it approved by British lawmakers.

“The talks are at a crucial stage,” May told parliament. “We now all need to hold our nerve to get the changes this House requires and deliver Brexit on time.”

The leader of the opposition Labour Party Jeremy Corbyn accused her of running down the clock with sham negotiations to pressure parliament into backing her deal.

Critics say the policy could leave Britain subject to EU rules for years or even indefinitely after leaving the bloc.

The EU says the backstop is vital to avoiding the return of border controls in Ireland and has refused to reopen the Brexit divorce deal, though May insists she can get legally binding changes to replace the most contentious parts of the backstop.

“By getting the changes we need to the backstop; by protecting and enhancing workers’ rights and environmental protections; and by enhancing the role of parliament in the next phase of negotiations I believe we can reach a deal that this House can support,” May said.