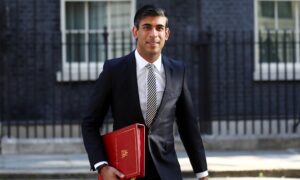 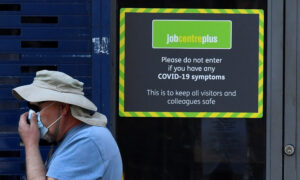 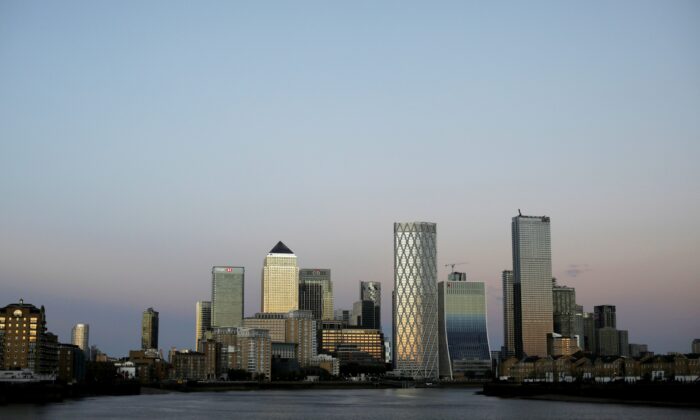 General view of the Canary Wharf financial district, following the outbreak of the CCP virus (COVID-19), in London, on May 5, 2020. (Marika Kochiashvili/Reuters)
Economies

The latest retail figures indicate some economic recovery for Britain, while the country’s public debt has reached a record high, official statistics show.

For the first time, the UK’s public debt has gone over 2 trillion pounds ($2.62 trillion), equivalent to 100.5 percent of the country’s GDP, according to the latest figures from the Office for National Statistics (ONS).

The last time Britain had a larger-than-economy public debt was in 1961, when it was still recovering from World War II.

Meanwhile, retail sales volumes in July bounced back above pre-pandemic levels in February.

Chancellor of the Exchequer Rishi Sunak said the CCP (Chinese Communist Party) virus crisis had put the public finances under significant strain, but without the government’s huge spending spree things would have been far worse.

“Today’s figures are a stark reminder that we must return our public finances to a sustainable footing over time, which will require taking difficult decisions,” he said.

“It is also why we are taking action now to support the growth and jobs which pay for our public services.”

To counter the economic effects of the lockdown in March in response to the pandemic, Sunak implemented a series of public spending schemes, tax cuts, and tax deferrals in an effort to avoid or delay mass unemployment.

Estimated borrowing since the start of the financial year (April) was 150.5 billion pounds ($197 billion), the highest since records began in 1993. The amount at the same point last year was 16 billion pounds ($21 billion).

Self-assessed income tax receipts were 4.8 billion pounds ($6.28 billion) in July 2020, just over half of the figure in July last year because of the tax deferral scheme for self-employed people.

Sunak is due to announce his latest plans for the economy in an annual budget speech in the autumn when unemployment is expected to be rising sharply.

A separate ONS report published on the same day showed signs of recovery in the retail sector.

July’s retail sales volumes increased by 3.6 percent on the previous month, and were 3 percent higher than pre-pandemic volumes in February.

Food store sales were also slightly higher than in February, but fell by 3.1 percent in July, which the ONS suggested could be due to more people eating out as restaurants and bars reopened.

Fuel sales kept increasing but were still 11.7 percent lower than February, correlating to some degree with the road traffic volume.

Online retail sales in July fell by 7 percent compared to the previous month, but were 50.4 percent higher than the level in February.

Clothing stores were the worst hit by the pandemic, but saw some growth in July, with sales volumes being 11.9 percent higher than in June. Overall, sales remained 25.7 percent lower than February.

July was the first full month that many shops had reopened after the lockdown, and August’s Purchasing Managers’ Index (PMI) data showed the fastest growth in almost seven years.

But Britain’s economy still faces a long recovery after shrinking by a record 20.4 percent in the second quarter, the largest contraction reported by any major economy so far during the CCP virus pandemic.

Reuters and Alexander Zhang contributed to this report