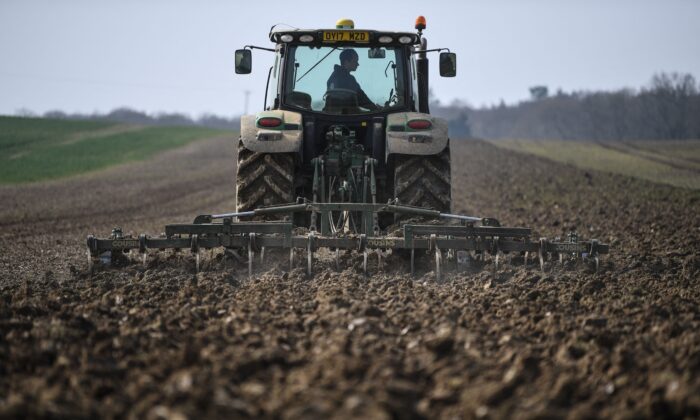 A tractor cultivates the ground for rapeseed oil crops at a farm in southern England, on March 28, 2022. (Daniel Leal / AFP via Getty Images)
UK

Fertiliser producer and carbon dioxide supplier CF Fertilisers blames high gas prices as it permanently shuts one of the UK’s only two major facilities, leaving the food supply chain and farming open to “threats,” according to farmers and food trade organisations.

The company supplies 60 percent of the country’s CO2 production, including fertiliser for farmers. CO2 is a by-product of fertiliser manufacturing and is used in areas such as meat processing, in the slaughtering process, and the packaging of chilled foods, according to Just-Food.

Farmers are now having to contend with skyrocketing prices for the material which supplies the nutrients essential for plant growth in agriculture. Farmers are also having to reduce nitrogen fertiliser rates to a level that they know will significantly reduce yield.

In March, it was £650 per tonne, a spokesperson for the organisation told The Epoch Times in an email at the time.

Operations at both the Billingham and Ince manufacturing facilities were shuttered in September 2021 due to high natural gas prices.

The closures sparked fears for the UK’s supply of carbon dioxide. However, in an agreement announced on Feb. 1 the site was given a last-minute reprieve by the government to keep the supply moving.

CF Fertilisers wrote that it believes “that only one manufacturing facility is needed to fulfil the domestic demand it has been serving.” But farmer unions and trade organisations disagreed.

Tom Bradshaw, deputy president of the National Farmers’ Union, told the Telegraph that the announcement from CF Fertilisers “is a further blow for farmers who are already suffering from incredibly high inflation for fertiliser costs.”

“This comes at a time when costs and supply face unprecedented risk. This closure is likely to further restrict global supply and we are seeking urgent clarification from CF Fertilisers on the production capabilities of its remaining plant at Billingham,” he added.

The publication talked to several other organisations including Jo Gilbertson, head of fertilisers at the Agricultural Industries Confederation, who said that this “will affect all sorts of things.”

“If we don’t have access to nitrogen fertilisers it affects everything from the cost of milk and meat products on the shelves to the price of bread because milling wheat needs the high protein level you get from nitrogen. Then you have to import grain and there’s a shortage of that because of the crisis in Ukraine,” she said.

When speaking at the 2022 Cereals event on June 8, Bradshaw said, “over the past year, the fertiliser market has entered into a new era.”

“Costs and supply face unprecedented risks and we need a visible, transparent market to allow producers, distributors and farmers alike to manage these threats in a commercially viable way,” he added.

“It is a real possibility that nitrogen fertiliser is the limiting factor globally over the next 18 months which, alongside the crisis in the Ukraine, will restrict global crop production and deepen the humanitarian disaster,” said Bradshaw.