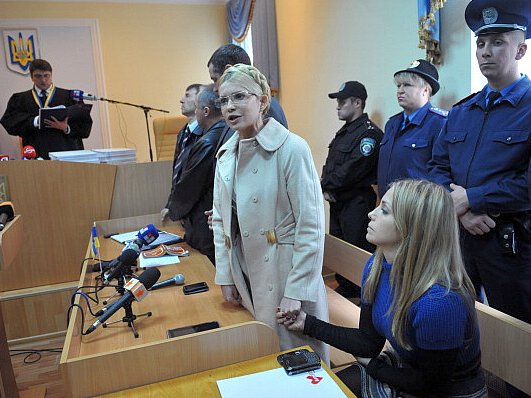 Ukrainian opposition leader Yulia Timoshenko in court on Oct. 11, 2011. Timoshenko's imprisonment has been protested as an abuse of judicial power by the current prime minister, a factor contributing to the declining faith in the Ukrainian judiciary. (Sergei Supinsky/AFP/Getty Images)
Europe

KYIV, Ukraine—Faith in the Ukrainian government and judicial system spiked in 2005; the Supreme Court had annulled election results decried as fraudulent, and a new government was elected under great scrutiny. The judiciary had upheld the call for democracy raised by the Orange Revolution protests.

In the years that followed, however, Ukrainians perceived an impunity given to officials and their family members by the courts. They saw the jailing of opposition leader Yulia Timoshenko, hailed as an abuse of judicial power by current Prime Minister Mykola Yanovych Azarov.

Faith in the judicial system is low.

Razumkov Centre sociologist Andriy Bychenko said many Ukrainians believe the courts protect the interests of authorities and will not protect ordinary citizens who bring charges against the authorities.

“We see that even if there was a video where everything that happened [as a crime was being committed] is seen, if officials or their children are involved in it, despite all the social pressure, all the governmental officials are recognized not guilty in the end,” Bychenko said.

The poll was conducted annually from 2005 to 2012. Elections brought hope to the people—faith in the judiciary was relatively high not only after the Orange Revolution of 2005, but also after the federal election in 2010.

Ukrainians hoped for improvement with each new leader, but disappointment followed and faith in the system declined, explained the sociologist.

The much protested jailing of opposition leader Yulia Timoshenko and her ally Yuriy Lutsenko did not help the reputation of the courts.

“My attitude to the courts is generally negative,” said Vyacheslav, an entrepreneur in Kyiv. Bychenko explained that it is fairly common for people not to go to court because of mistrust.

Dec. 15 was a Ukrainian national day to celebrate judges and court workers. Judge Volodymyr Trofimov, 58, and three of his family members were beheaded that day.

The gruesome murder is still being investigated, and the motive has not been determined. Trofimov also had an extensive antiques collection, and the incident may have been a robbery gone wrong.

Judge Serhiy Zubkov of Kyiv was murdered in March 2011. In 2006, Judge Victor Lopatsky was shot, but not fatally wounded. Two suspects were convicted of Zubkov’s murder, having been evicted as a result of the judge’s decision in a property dispute. A public campaign is calling for their release, saying they were wrongly accused.

Ruslana Lyzhichko, a famous Ukrainian pop-singer and Eurovision winner, spoke at a press conference rallying for the release of these convicts.