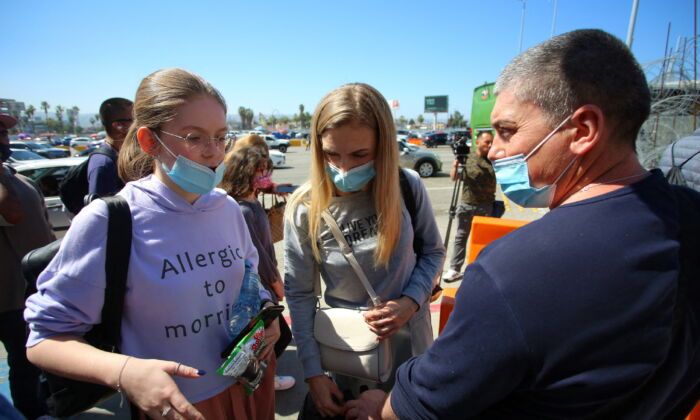 A Ukrainian family chat as they seek a humanitarian visa at the San Ysidro Port of Entry of the U.S.–Mexico border in Tijuana, on March 15, 2022. (Jorge Duenes/Reuters)
Russia-Ukraine War

Ukrainian Refugees Welcomed in Latin America, Though Few Are Staying

Nations beyond Europe are now seeing Ukrainians who have fled their homeland turn up at their borders since Russia’s invasion.

In Latin America, countries such as Brazil, Argentina, Mexico, Guatemala, and Bolivia have made immigration policy adjustments and are taking on refugees amid the region’s latest crisis of displaced people arriving from conflict zones. However, in the early stages of this humanitarian crisis, a trend has begun to emerge: Ukrainians are arriving in Latin America, but many aren’t staying.

Nearly 900 asylum-seekers arrived in Brazil through March 17 after President Jair Bolsonaro announced a humanitarian visa for Ukrainian refugees on Feb. 28.

“We will do everything possible to welcome the Ukrainian people,” he said.

Brazil offers a unique attraction for the refugees, as it boasts the largest number of Ukrainian residents in the region.

The majority of resettled and Ukrainian expatriates live in Parana, which is the sixth most-populated state in Brazil and home to upward of 400,000 Ukrainians. The South American giant also has a strong economy and a diverse language profile, including many English and other Western language speakers.

The Brazilian humanitarian visa allows Ukrainians arriving from the war to work and study as normal. The initial paperwork is valid for 180 days; however, refugees will be able to live in the country for up to two years after the initial visa expires.

“I feel obliged and happy to be able to help refugees,” said welcome committee coordinator Natalia Waszcynskie, who is the daughter of Ukrainian immigrants. “It doesn’t hurt to help, it’s a humanitarian issue.”

Despite the warm welcome from government officials and residents, few of the 894 refugees have seized the opportunity for longer-term resettlement. As of March 18, federal police in Brazil reported there were only 21 requests for temporary visas, five for residency, and two inquiries for other visa classifications.

In Mexico, a similar pattern has evolved with Ukrainian refugees are arriving but not lingering. Like so many, asylum-seekers are making their way to the U.S. southern border.

President Andres Manuel López Obrador said on March 2 that Mexico will offer asylum to all people who request it, regardless of nationality.

Immigration officials are offering tourist visas good for up to six months for those seeking refuge from the conflict in Ukraine.

“We would like to shelter everyone, embrace everyone, that there were no borders. We are from the party of universal fraternity,” López Obrador said.

Hundreds of Ukrainians have been arriving in Mexico, many through Tijuana’s international airport, and traveling north to the U.S. border crossing near San Diego.

The surge of newly displaced people began with speculation about war and a Russian military buildup last year.

From October 2021 to February of this year, U.S. Border Patrol agents encountered more than 1,300 Ukrainians.

A federal delegate representing the state of Baja California, Jesus Alejandro Ruiz Uribe, noted that since the beginning of Russia’s attack on Ukraine on Feb. 24, 487 refugees have arrived in the state, with 310 of those making the journey in March alone.

The push for Ukrainians to enter the United States through the besieged southern land border began in earnest after a mother and her three children, who arrived in Latin America via Mexico City, were granted special entry by the White House after initially being denied entry at San Ysidro because of Title 42 pandemic health restrictions.

Center for Immigration Studies analyst Todd Bensman says that sets the wrong tone for Ukrainians seeking asylum in the United States, especially since more than 3 million refugees have already fled the embattled European nation and are looking for resettlement.

He said exceptions made at the border for Ukrainian refugees will “undoubtedly draw even more to the southern border and into an asylum system that helps neither Ukrainians nor the American national interest.”

Meanwhile, Latin American countries are rolling out the welcome mat for their displaced European neighbors.

Argentina is offering a humanitarian visa to those fleeing the conflict. The National Directorate of Migration authorized the entry of Ukrainian citizens and their direct relatives for up to three years as part of the crisis response effort.

The South American nation also is home to the second-largest population of Ukrainian immigrants in the region.

Stuard Rodriguez, the director of the Institute of Migration, met the families in person and said the country “receives them with open arms and is at their complete disposal to help in whatever is pertinent.”

That followed the outcry after a Ukrainian refugee couple was illegally detained and deported by immigration officials on March 12, despite having the correct paperwork to enter the country.