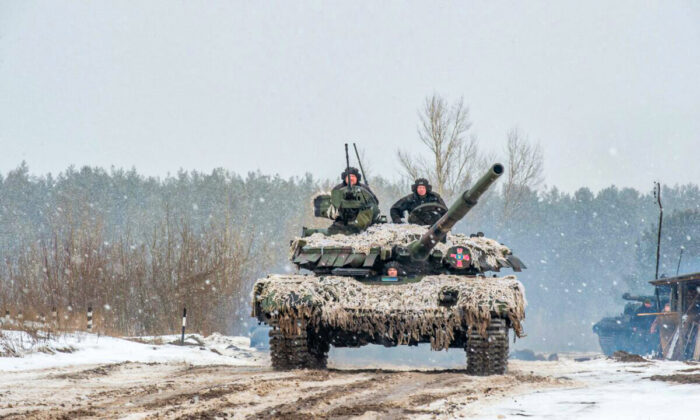 Ukrainian Military Forces servicemen of the 92nd mechanized brigade use tanks, self-propelled guns and other armored vehicles to conduct live-fire exercises near the town of Chuguev, in Kharkiv region, on Feb. 10, 2022. (Sergey BOBOK / AFP via Getty Images)
Russia-Ukraine War

The Ukrainian military allegedly blew up multiple bridges outside of the capital city of Kyiv to stop Russian troops from advancing from Ivankiv, according to multiple reports.

Ukraine’s Ministry of Interior Affairs said that Ukrainian armed forces blew up a bridge in Irpin, around 15 miles west of Kyiv, to prevent Russian forces from approaching the capital, NBC reported.

The Ukrainian Defense Ministry also confirmed that troops exploded the bridge at Ivankiv, about 30 miles north of Kyiv, to prevent a Russian column of forces from advancing towards the capital according to CNN. The ministry said the Russian advance was stopped, CNN reports.

Ukrinform reports that the President’s Office confirmed reports that a column of Russian tanks broke through near Ivankiv and was heading to Kyiv from Vyshgorod.

“Tanks are coming. We are fighting. Fights are coming,” the President’s office said, according to Ukrinform.

The General Staff of the Armed Forces of Ukraine told Ukrinform that the convoy of tanks had been stopped after the Ukrainian military blew up the bridge near Kyiv.

“The bridge was blown up, we stopped them,” the General Staff said.

Images shared on social media taken by Ukrainian media appear to show a bridge blown up.

The Epoch Times has been unable to verify the images.

Reports regarding the bridge come as explosions rocked Kyiv overnight, having been reported in the city around 3 a.m. Friday local time.

“Last time our capital experienced anything like this was in 1941 when it was attacked by Nazi Germany. Ukraine defeated that evil and will defeat this one. Stop Putin. Isolate Russia. Severe [sic] all ties. Kick Russia out of everywhete [sic],” he wrote.

Olexander Scherba, a Ukrainian diplomat who was the country’s ambassador to Austria 2014–2021, said on Twitter that at least “two heavy explosions” occurred in Kyiv and that “Putin’s drone (or missile) fell on an apartment building” in the city which had set it on fire.

He later posted a video of an explosion in the sky, captioned: “Kyiv now… A drone or plane hit? A missile intercepted?”

The country’s adviser to the Interior, minister Anton Gerashchenko, said on Telegram attributed the blasts to the downing of a Russian plane or drone which later crashed in the Darnitsky district. It was unclear whether the aircraft was manned.

On Friday, Scherba said that Russian special-ops groups were in Kyiv and that fighting was underway.

Multiple other videos shared on social media appeared to show Russian troops inside the capital city while reports said that fighting was taking place on the streets in one district of Kyiv.

Russia began invading Ukraine early on Thursday with a series of missile strikes that mainly targeted government and military installations, on the orders of President Vladimir Putin, who announced a “special military operation.”

At least 137 people had been killed and 316 were wounded since Russia launched its assault on the country, Ukrainian President Volodymyr Zelensky said about two hours prior to the reported explosions in Kyiv.

On Thursday, Zelensky said in a speech that Ukraine has been “left alone” to defend itself against the Russian invasion and that “Russia attacked the entire territory of our state.”

“And today our defenders have done a lot,” Zelensky said. “They defended almost the entire territory of Ukraine, which suffered direct blows. They regain the one [sic] that the enemy managed to occupy.”

“No matter how many conversations I had with the leaders of different countries today, I heard a few things. The first is that we are supported. And I am grateful to each state that helps Ukraine concretely, not just in words,” Zelensky said.

“But there is another—we are left alone in defense of our state. Who is ready to fight with us? Honestly—I do not see such. Who is ready to guarantee Ukraine’s accession to NATO? Honestly, everyone is afraid,” the president said.

The two spoke about “Russia’s unfounded and unprovoked war against Ukraine,” according to Kirby.

“Secretary Austin and Minister Reznikov committed to continuing their close coordination during this conflict that Russia alone has created.”