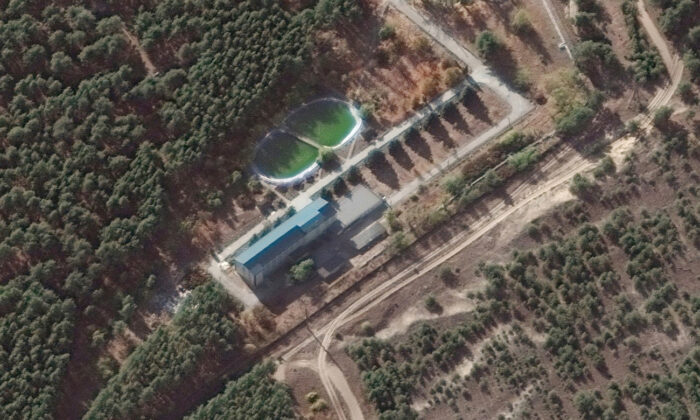 A nursing home in the eastern region of Luhansk, Ukraine, on Oct. 13, 2021. (Satellite image 2022 Maxar Technologies via AP)
Russia-Ukraine War

Ukrainian forces put civilians at risk during an attack on March 11 on a nursing home in southeast Kyiv, according to a report from the United Nations.

Just two weeks after Russia mounted an invasion into Ukraine on Feb. 24, a care house in the village of Stara Krasnianka was attacked. Located in the eastern region of Luhansk, the village is about 360 miles (580 kilometers) southeast of Kyiv.

Ukrainian authorities had blamed Russian forces squarely for killing more than 50 civilians in what it said was an unprovoked attack. But the report by the U.N.’s Office of the High Commissioner for Human Rights (OHCHR) released in late June, suggests that Ukrainian soldiers bear some blame for the situation.

The report (pdf) covers what the U.N. has assessed as violations of international humanitarian law that have occurred in the ongoing Ukraine–Russia war from Feb. 24 to May 15.

According to the report, soldiers from Ukrainian armed forces had entered the care house in Stara Krasnianka on March 7, because the site “had strategic value due to its proximity to an important road.”

The report stated that on the morning of March 11, soldiers from Russian-affiliated groups “attacked the care house with heavy weapons, with patients and staff still inside.”

At the time, 71 patients with disabilities and 15 staff, as well as Ukrainian soldiers, were in the care house with no access to water or electricity.

“A fire started and spread across the care house while fighting was ongoing,” the report stated of the March 11 attack. “Some staff and patients fled the care house and ran into the forest, until they were met five kilometers away by Russian affiliated armed groups, who provided them with assistance.

“According to various accounts, at least 22 patients survived the attack, but the exact number of persons killed remains unknown.”

Prior to the attack, in early March, the management of the care house had requested local authorities to evacuate the residents, but it was “was reportedly impossible as Ukrainian armed forces had allegedly mined the surrounding area and blocked roads.”

The OHCHR said that it is concerned that both Russian and Ukrainian soldiers launched military operations near civilians but didn’t take any measures to protect civilians, as required under international humanitarian law.

“OHCHR is further concerned by reports of the use of human shields, which involves seeking to use the presence or movement of the civilian population or individual civilians to render certain points or areas immune from military operations,” the office added. “The use of human shields is specifically prohibited by article 28 of Geneva Convention IV and article 51(7) of additional protocol I.”

David Crane, a former Defense Department official and a veteran of numerous international war crime investigation, told The Associated Press that Ukrainian forces may have violated the laws of armed conflict by not having evacuated the occupants in the care house.

“The bottom-line rule is that civilians cannot intentionally be targeted. Period. For whatever reason,” he told the news agency. “The Ukrainians placed those people in a situation which was a killing zone. And you can’t do that.”