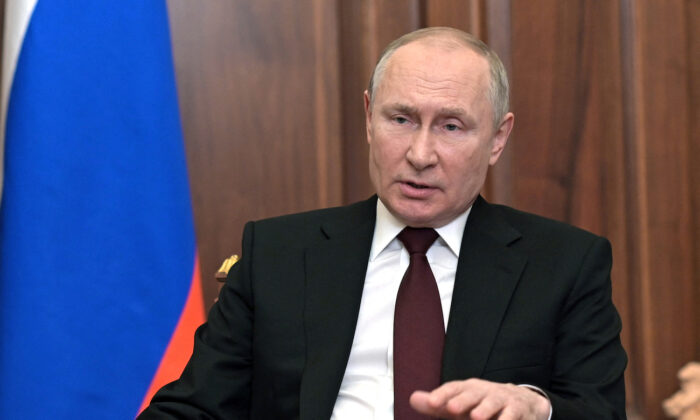 Russian President Vladimir Putin speaks during his address to the nation at the Kremlin in Moscow on Feb. 21, 2022.(Alexey Nikolsky/Sputnik/AFP via Getty Images)
International

Putin said in an emergency address on Russian TV that the military operation is intended to protect civilians and to demilitarize Ukraine, and is a response to threats coming from Ukraine.

Shortly after Putin’s address, explosions were reported in Ukraine’s capital, Kyiv, as well as in other cities, including Kharkiv, Mariupol, and Odesa.

Putin’s announcement comes after he announced Monday that Russia recognizes the Luhansk and Donetsk regions in eastern Ukraine as independent, and signed a decree to authorize the Russian Defense Ministry to send troops into the area for “peacekeeping operations.”

President Joe Biden late Wednesday local time issued a statement saying that Putin “has chosen a premeditated war that will bring a catastrophic loss of life and human suffering.”

“The prayers of the entire world are with the people of Ukraine tonight as they suffer an unprovoked and unjustified attack by Russian military forces,” Biden said. “Russia alone is responsible for the death and destruction this attack will bring, and the United States and its Allies and partners will respond in a united and decisive way. The world will hold Russia accountable.”

Biden said he will monitor the situation from the White House in the evening and get regular updates from the national security team.

“Tomorrow, I will meet with my G7 counterparts in the morning and then speak to the American people to announce the further consequences the United States and our Allies and partners will impose on Russia for this needless act of aggression against Ukraine and global peace and security,” Biden said. “We will also coordinate with our NATO Allies to ensure a strong, united response that deters any aggression against the Alliance. Tonight, Jill and I are praying for the brave and proud people of Ukraine.”

Following Putin’s declaration, Ukraine Foreign Minister Dmytro Kuleba said in a statement, “Putin has launched a full-scale invasion of Ukraine. Peaceful Ukrainian cities are under strikes. This is a war of aggression.”

“The world can and must stop Putin. The time to act is now.”

NATO Secretary General Jens Stoltenberg issued a statement Thursday: “I strongly condemn Russia’s reckless and unprovoked attack on Ukraine, which puts at risk countless civilian lives. Once again, despite our repeated warnings and tireless efforts to engage in diplomacy, Russia has chosen the path of aggression against a sovereign and independent country.”

He called the situation “a grave breach of international law, and a serious threat to Euro-Atlantic security.”

“I call on Russia to cease its military action immediately and respect Ukraine’s sovereignty and territorial integrity,” Stoltenberg said. “NATO Allies will meet to address the consequences of Russia’s aggressive actions. We stand with the people of Ukraine at this terrible time. NATO will do all it takes to protect and defend all Allies.”

U.N. Secretary General Antonio Guterres told journalists in New York that the latest development Thursday marks “the saddest moment in my tenure as Secretary-General of the United Nations.”

Guterres was attending an emergency meeting of the U.N. Security Council, called by Ukraine, just prior to Putin’s announcement.

Guterres had opened the meeting, telling Putin, “give peace a chance,” but later said he had to change his appeal following Putin’s announcement.