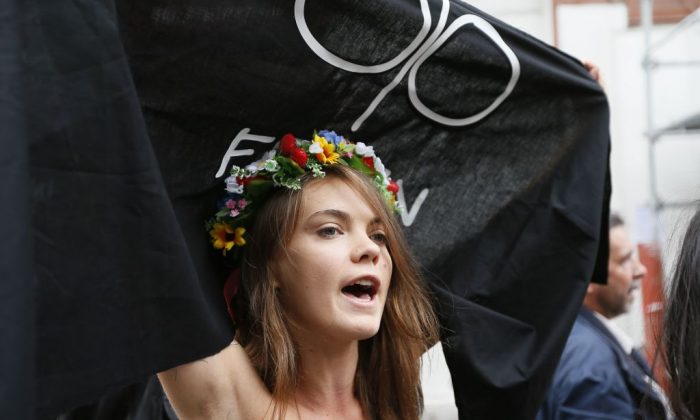 The co-founder of Femen, a Ukrainian feminist movement, was found dead in her apartment in Montrouge, Paris with a note next to her body on Monday.

Oksana Shachko’s death was announced on the official Femen website on July 24 and said that an official report on the death is expected from the police.

Initial reports say the death was a suicide.

Shachko, 31, was a devout Orthodox Christian as a young girl. Her parents put her in iconography school at age eight where she would learn to paint religious icons. When she was 12, she wanted to live in the church, paint icons, and spend the rest of her life praying. Shachko aspired to be a nun until her mum cried and asked her to stay, she revealed in an interview with Crash.

At the age of 14, Shachko came upon a philosophical club that consisted of 15 to 20-year-olds. The members were Marxist. After a few years, she became an atheist and became linked to a group of young communists who tried to create a political party of young communists. Since the collapse of the USSR, many Ukrainians remain opposed to communism, particularly those who had experienced Marxist communal life behind the Iron Curtain and the totalitarian rule of Stalin. But as a new generation of Ukrainians seduced by Marxist ideals, Shachko and her friends would show their respect to communism by cleaning statues of Lenin.

The party of young communists would come to a halt after the leader of the Communist Party in the Ukraine shut them down out of fear of the types of activities they were holding. After leaving the communist party, Shachko encountered Anna Hustol and Alexandra Shevechenko and together, they founded the Femen movement.

In 2013, France accepted Shachko and some of the original Femen members as political refugees due to alleged retaliation upon them in Hanover when Femen held a radical protest against Vladimir Putin. Shachko said that protesting led to their being beaten on the streets and kidnapped in Ukraine by Russian secret services and their special police.

Upon arriving in France, they tried to continue with their activism.

But Shachko didn’t remain an active member in Femen for long. Shachko, Hutsol and Shevchenko quit the Femen movement in 2014 in France after what Shachko described as “losers” joined the movement.

Shachko criticised that the new members were women who had nothing better to do with their lives and were involved just to be photographed, she told Crash.

In regards to Shachko’s death, spokeswoman for the Nanterre Commune prosecutor, Emmanuelle Lepissier, said on July 25 that the cause of death will be confirmed after an autopsy has been completed.