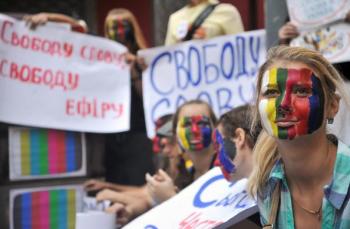 The court announced that the two channels, Channel 5 and TBi, will have their broadcast frequencies cancelled.

The decision comes after a lengthy legal process, which has been accompanied by domestic and international criticism against Ukrainian officials for curtailing media around the country.

The Inter Media Group claimed the decision was illegal and brought the issue to court, which ruled in June that the tender's procedure had violations.

Channel 5 has accused National Security chief, Valeriy Khoroshkovksy, former owner of the Inter Media Group, of influencing the decision to cancel its broadcasting.

Khoroshkovksy, whose wife is the owner of the Inter Media Group, has denied the allegations.

Other media and rights groups, including The International Press Institute (IPI), have expressed concern about today's ruling which will force the NTRBC to offer a new tender with more TV channels participating.

Channel 5 said that it will appeal the decision to the Supreme Court, and if that did not work, it would go to the European Court for final appeals.

“Actuality, the court hearing looked pretty unclear and the advocates made mistakes. It seemed to me that the court had had a certain decision beforehand,” Kiev Press Institute quoted the editor-in-chief of Channel 5 Vladimir Mjelskiy as saying.

Roman Golovenko, a media expert with Kiev Press Institute said that the Broadcasting Council had a history of bad decision-making process which was criticized a lot before.

“Generally, the court proceedings have put in question the legitimacy of the council’s activities not only over the controversial tender, but of many other issues,” the organization reported.

After Reporters Without Borders (RSF) had met journalists and officials in July, it concluded that “it became more and more problematic in Ukraine to be an independent journalist.”