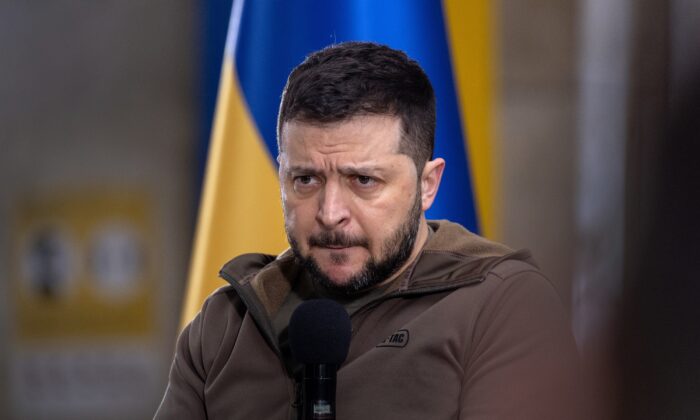 Ukrainian President Volodymyr Zelenskyy signed a law on May 23 that enables the country to seize and sell assets of people who support Russian President Vladimir Putin’s military invasion.

The law focuses primarily on Russian-owned assets and property in Ukraine, particularly those belonging to Russian citizens who have already had their assets blocked by Ukraine’s government, and will help bolster Ukraine’s war efforts, NPR reported.

It also targets individuals who aided the establishment of pro-Russian separatist states in Russian-controlled portions of Ukraine or who helped set up elections or referendums in these areas. Eastern Ukraine is home to two pro-Russian separatist states—the Donetsk People’s Republic and Luhansk People’s Republic—recognized by Russia as independent from Ukraine but regarded by Ukrainian officials as occupied terrorist states.

Funneling money to the Kremlin or “glorifying those who are fighting against Ukraine” are also listed as offenses, NPR reported.

The law is designed to rapidly resolve cases, and includes a stipulation stating that the court won’t slow its consideration of the claim against an individual who fails to appear or be represented at court.

Plans are also laid out for a fast appeals process under the law, which would provide each party five days in which to file an appeal. An appeals panel would also have five days to take up the matter.

The law will remain in force while Ukraine is under martial law, which began when Russian forces invaded on Feb. 24. On May 22, the Supreme Council of Ukraine, also known as the Verkhovna Rada, extended martial law and general mobilization for another 90 days until Aug. 23.

Zelenskyy has vowed that Ukraine will become a “powerful and safe state that will get rid of corruption and oligarchic influence” after defeating Russian forces.

The president made the remarks during an online appearance at the World Economic Forum in Davos.

“It will be a strong state with concrete security priorities,” Zelenskyy said. “We understand that anything can happen at any moment with such a neighbor, and, unfortunately, there can be war. The war may be repeated. I am convinced that we must create conditions so that people and businesses are not afraid to develop in our country,” he said.

The enacting of the law follows just a week after a Ukrainian court seized about $420 million worth of assets owned by Russian billionaire Mikhail Fridman.

Ukraine’s prosecutor general, Iryna Venediktova, said in a statement that the government had seized securities in Cypriot companies worth more than 12.4 billion Ukrainian hryvnia ($419.7 million) held at a bank in Ukraine.

In a Facebook post, Venediktova identified the institution as Alfa Bank, which was founded in 1990 by Fridman, an oligarch who was born in Ukraine.

Alfa Bank officials didn’t respond by press time to a request by The Epoch Times for comment.

The European Union previously sanctioned Fridman and his business partner, Petr Aven, on Feb 28, stating that they had been “engaged in the Kremlin’s efforts to lift the Western sanctions issued to counter Russian aggressive policy against Ukraine” and “actively supported materially or financially and benefited from Russian decision-makers responsible for the annexation of Crimea and the destabilization of Ukraine.”

EU officials also stated that Fridman had “supported actions or policies which undermine or threaten the territorial integrity, sovereignty, and independence of Ukraine.”

Both Fridman and Aven have since resigned from Alfa Bank’s board of directors.