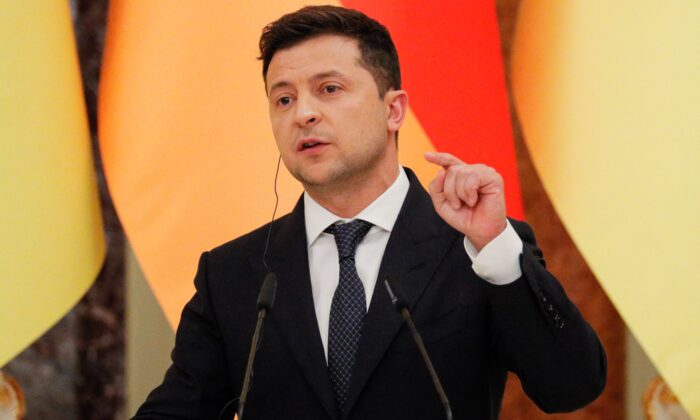 “There has been too much information about a full-scale war with Russia–even specific dates have been announced,” Zelensky told reporters on Feb. 12.

“We understand there are risks. If you have any additional information regarding the 100 percent guaranteed invasion of Ukraine by Russia on 16 February, please give it to us,” the Ukrainian president said.

Zelensky also cautioned against such warnings of a potential imminent invasion which he said is creating panic in his country and reiterated that Ukraine’s wish, first and foremost, is to deescalate tensions.

The president said that his country will rely on its own forces in responding to any “surprises … from any side, from any borders” and thanked international partners for intelligence sharing on the risks presented by Russia.

He noted, however, that such information needs to be analyzed “very carefully.”

Zelensky’s comments come after the White House national security adviser Jake Sullivan told reporters that Russia could invade Ukraine “any day now,” noting that it might do so before the completion of the Beijing Olympics, which are scheduled to end Feb. 20.

“If you look at the disposition of forces, both in Belarus and in Russia on the other side of the Ukrainian border from the north and from the east, the Russians are in a position to be able to mount a major military action into Ukraine any day now,” said Sullivan in a press briefing on Feb. 11.

However, Sullivan stressed that the Biden administration is “not saying that a … final decision has been taken by President Putin.”

“What we are saying is that we have a sufficient level of concern, based on what we are seeing on the ground and what our intelligence analysts have picked up, that we are sending this clear message. And it remains a message that we have now been sending for some time. And it is—yes, it is an urgent message because we are in an urgent situation,” Sullivan said.

The White House has also encouraged all Americans currently in Ukraine to leave the country as tensions at the Russia–Ukraine border escalate.

Americans currently in Ukraine have been asked to contact the U.S. embassy in Kyiv if they need financial or logistical help to leave.

Sullivan doubled down on his comments in an interview with CNN on Feb. 13, stressing again that Russia could invade Ukraine “any day now” and that such an invasion could take place within a week.

Russia denies that it plans to invade Ukraine and has asked the United States and its allies to deny Ukraine and other former Soviet nations membership into NATO.

In the meantime, Russia has amassed around 100,000 troops situated near Ukraine’s eastern borders.

“We cannot perfectly predict the day, but we have now been saying for some time that we are in the window, and an invasion could begin, a major military action could begin by Russia in Ukraine any day now—that includes this coming week, before the end of the Olympics,” Sullivan said.

During a Feb. 13 phone call between Zelensky and President Joe Biden, the Ukrainian president invited Biden to visit Kyiv in a move he believes would help deescalate and stabilize the situation with Russia.

“I’m convinced that your arrival in Kyiv in the coming days, which are crucial for stabilizing the situation, will be a powerful signal and contribute to de-escalation,” the presidential office quoted Zelensky as telling Biden.

Zelensky also noted the steps taken by the United States and other partners to provide Ukraine with effective support.

“We feel it. And we hope that, among other things, it will help prevent the spread of panic,” said Zelensky.