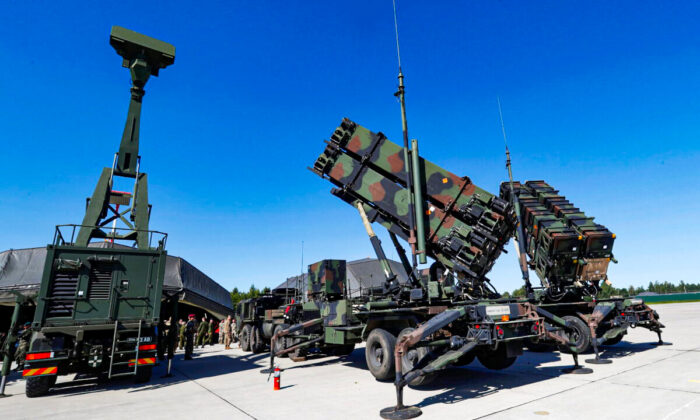 The US-made system started arriving in the Central European country—which shares a 100km-long (62-mile-long) border with Ukraine—from NATO partner countries and the deployment will continue in the coming days, according to the defense minister.

“I can gladly confirm that the first units in charge of the deployment of the Patriot anti-air defense system are gradually coming to the territory of the Slovak Republic,” Nad said in a statement on social media.

NATO’s Patriot air defense system will be operated by German and Dutch troops and will initially be deployed at the Sliac airport in central Slovakia to help reinforce the NATO’s defenses of its member amid Russia’s ongoing invasion in Ukraine.

Nad thanked both Germany and the Netherlands for their “really responsible alliance decision to accept our request for fundamental strengthening of the defense of the Slovak Republic.”

“The system will be temporarily deployed at the Sliac air force base. Further deployment areas are being considered … so the security umbrella covers the largest-possible part of Slovak territory,” Nad continued.

Nad said the Patriot system will further bolster the defense of the airspace of the Slovak Republic and will not be a replacement of the Soviet-era S-300 system that Slovakia, which is part of both NATO and the EU, operates.

However, he noted that the S-300 system is old, and has “inadequate capabilities” as well as a “factual dependence on the Russian Federation.”

Slovakia said on March 17 that it was ready to send its Soviet-era S-300 air defense system to Ukraine “immediately” provided that it receives a replacement to protect its own airspace.

At a joint press conference with U.S. Defense Secretary Lloyd Austin, defense minister Nad noted that the S-300 is Slovakia’s only strategic air defense system, adding that handing it over to Ukraine would create a “security gap in NATO.”

However, Russia has vowed to block the transfer of such air defense systems to Kyiv and also said it may target Western arms supplies.

The country’s foreign minister Sergey Lavrov said in an interview with Russia Today that to do so would be “illegal”, citing intergovernmental agreements and user certificates precluding the transfer of Soviet or Russian-made systems to third countries.

Experts have pointed out that while there are typically contractual restrictions regarding the re-export of arms of the type Lavrov mentioned, Russia has grossly violated international law with its invasion of Ukraine.

So far, little progress has been made in peace talks between Russia and Ukraine, although Turkey’s foreign minister said in an interview published on Sunday that both countries were coming closer to reaching an agreement on “critical” issues.

“We can say we are hopeful for a ceasefire if the sides do not take a step back from the current positions,” Turkish Foreign Minister Mevlut Cavusoglu told local media.