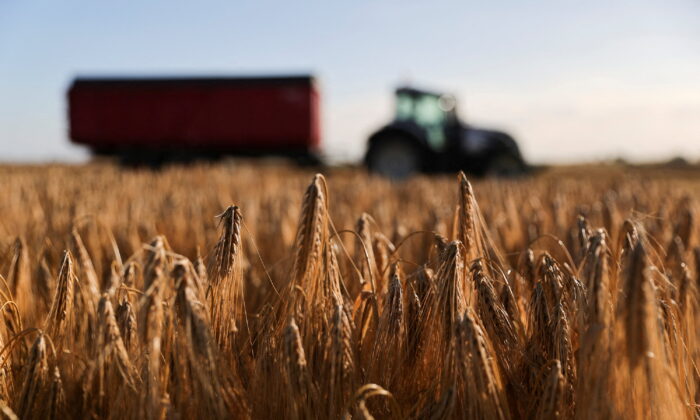 A French farmer harvests his field of barley during sunset in Aubencheul-au-Bac, northern France, on June 28, 2022. (Pascal Rossignol/Reuters)
Gold and Commodities

Ukraine’s war has significantly disturbed global agricultural markets by sharply driving up prices of key products and inputs such as fertilizer and animal feed, the European Union’s statistics office said on Friday.

Eurostat data showed that the average price of goods and services currently consumed in agriculture increased by 9.5 percent in the first quarter of 2022 compared with the last quarter of 2021, including a 21.2 percent hike for fertilizers and soil improvers, 17.4 percent for energy and lubricants and 9.2 percent for animal feed.

The average price of agricultural output increased by 6 percent in the same quarter, Eurostat said.

The invasion of Ukraine by Russia, both major agricultural exporters, is disrupting shipments of edible oils and fertilizer from the Black Sea region, sending prices of wheat, soy, and corn to near records earlier this year.

Russia is also a key fertilizer exporter and Ukraine is a major exporter of corn and sunflower oil.

The average price of fertilizer and soil improvers almost doubled in the first quarter of the year compared with the same period in 2021, while energy and lubricant prices rose by 55.6 percent. The higher cost of cereals and energy was reflected in 22.9 percent rise in the average cost animal feed.

Prices of agricultural output such as cereals, oilseed, cattle, poultry, and milk jumped between 51.7 percent and 21.4 percent in the same period year-on-year, Eurostat added.

The EU executive on Friday lowered its forecast for soft wheat production in the bloc in 2022/23 to well below last season’s level but maintained its outlook for record exports.