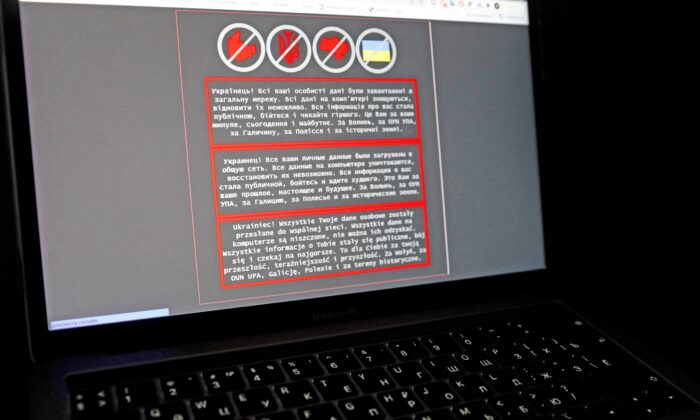 A laptop screen displays a warning message in Ukrainian, Russian, and Polish, that appeared on the official website of the Ukrainian Foreign Ministry after a massive cyberattack, in this illustration taken on Jan. 14, 2022. (Valentyn Ogirenko/Illustration/Reuters)
Europe

Serhiy Demedyuk, deputy secretary of the national security and defense council, told Reuters that Ukraine blamed the Jan. 14 attack—which defaced government websites with threatening messages—on a group known as UNC1151 and that it was cover for more destructive actions behind the scenes.

“We believe preliminarily that the group UNC1151 may be involved in this attack,” he said.

Demedyuk’s comments offer the first detailed analysis by Kyiv on the suspected culprits behind the attack on dozens of websites. Officials on Jan. 14 said Russia was probably involved but gave no details. Belarus is a close ally of Russia.

The cyberattack splashed websites with a warning to “be afraid and expect the worst” at a time when Russia has massed troops near Ukraine’s borders, and while Kyiv and Washington are concerned that Moscow is planning a new military assault on Ukraine.

Russia has dismissed such fears as “unfounded.”

The office of Belarusian President Alexander Lukashenko didn’t immediately respond to a request for comment about Demedyuk’s remarks.

Russia’s foreign ministry also didn’t immediately respond to a request for comment on his remarks. It has previously denied involvement in cyberattacks, including against Ukraine.

“The defacement of the sites was just a cover for more destructive actions that were taking place behind the scenes and the consequences of which we will feel in the near future,” Demedyuk said in written comments.

In a reference to UNC1151, he said: “This is a cyber-espionage group affiliated with the special services of the Republic of Belarus.”

Demedyuk, a former head of Ukraine’s cyber police, said the group had a track record of targeting Lithuania, Latvia, Poland, and Ukraine, and had spread narratives decrying the NATO alliance’s presence in Europe.

“The malicious software used to encrypt some government servers is very similar in its characteristics to that used by the ATP-29 group,” he said, referring to a group suspected of involvement in hacking the Democratic National Committee before the 2016 U.S. presidential election.

“The group specializes in cyber espionage, which is associated with the Russian special services (Foreign Intelligence Service of the Russian Federation) and which, for its attacks, resorts to recruiting or undercover work of its insiders in the right company,” Demedyuk said.

The messages left on the Ukrainian websites on Jan. 14 were in three languages: Ukrainian, Russian, and Polish. They referred to Volhynia and Eastern Galicia, where mass killings were carried out in Nazi German-occupied Poland by the Ukrainian Insurgent Army (UPA). The episode remains a point of contention between Poland and Ukraine.

Demedyuk suggested the hackers had used Google Translate for the Polish translation.

“It is obvious that they did not succeed in misleading anyone with this primitive method, but still this is evidence that the attackers ‘played’ on the Polish-Ukrainian relations (which are only getting stronger every day),” he said.