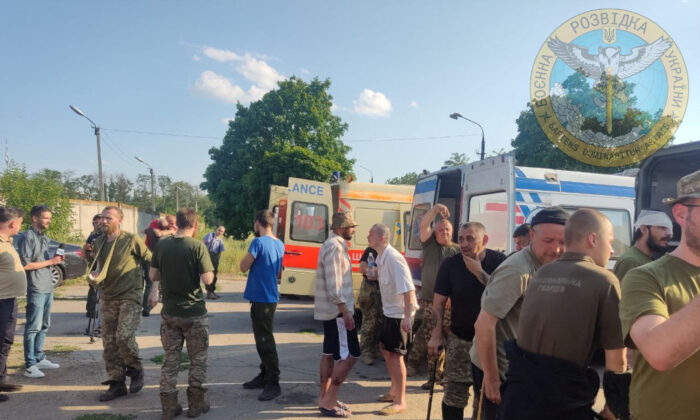 Ukrainian soldiers stand next to ambulances as Ukraine carries out an exchange of prisoners in the location given as Zaporizhzhia, Ukraine, in this handout photo released on June 29, 2022. (Courtesy of Ukraine's Military Intelligence/Handout via Reuters)
Russia-Ukraine War

KYIV—Ukraine on Wednesday carried out its biggest exchange of prisoners of war since Russia invaded, securing the release of 144 of its soldiers, including 95 who defended Mariupol’s steelworkers, Ukraine’s military intelligence agency said.

The majority of the Ukrainians were badly wounded, suffering from gunshot and shrapnel wounds, blast traumas, burns, fractured bones, and amputated limbs, the agency known by the acronym GUR said in a statement on Telegram.

144 Ukrainian warriors have been liberated from russian prisons via an exchange mechanism. 95 of them participated in the defence of Mariupol.
🇺🇦 will fight for every single one of our servicemembers.#StandWithUkraine️#FightLikeUkrainian

There was no comment from Russia about a prisoner swap.

But the head of the self-proclaimed Donetsk People’s Republic in eastern Ukraine said it had secured the release of 144 soldiers, including its fighters and those of the Russian army.

“We handed over to Kyiv the same number of prisoners from Ukrainian armed units, most of whom were wounded.”

The prisoner swap included the handover of 43 members of the Azov regiment, a National Guard unit that Russia says is a dangerous battalion.

Fighting intensified on Saturday for Lysychansk, Ukraine’s last bastion in the strategic eastern province of Luhansk, while blasts shook a southern city.

Andrei Marochko, an officer of the pro-Russian Luhansk People’s Militia, was quoted by Russia’s TASS news agency as saying that the militia’s red hammer-and-sickle flag was now flying over the administrative building in Lysychansk, although Ukraine’s military rejected claims that the city was encircled.

“Now there are fierce battles near Lysychansk, however, fortunately, the city is not surrounded and is under the control of the Ukrainian army,” Muzychuk said.

He said the situations in the Lysychansk and Bakhmut areas, as well as in Kharkiv region, were the most difficult on the entire front line.

“The goal of the enemy here remains access to the administrative border of Donetsk and Luhansk regions. Also, in the Sloviansk direction, the enemy is attempting assault actions,” he said.

Oleksandr Senkevych, mayor of the southern region of Mykolaiv, which borders the vital Black Sea port of Odesa, reported powerful explosions in the city.

“Stay in shelters!” he wrote on the Telegram messaging app as air raid sirens sounded.

The cause of the blasts was not immediately clear, although Russia later said it had hit army command posts in the area.

Ukrainian media quoted Vadym Denysenko, an adviser to Ukraine’s Interior Ministry, as saying that the Russian claims to have surrounded Lysychansk were a lie aimed at demoralizing Ukrainians and encouraging pro-Russian forces.

The Chief of General Staff of the Russian Armed Forces, Valery Gerasimov, inspected Russian troops involved in what Moscow calls its “special military operation,” Russia’s defense ministry said, although it was not clear if he was in Ukraine.

The inspection followed slow but steady gains by Russian forces in east Ukraine.

Russia is seeking to drive Ukrainian forces out of Luhansk and Donetsk provinces in the industrialized eastern Donbas region where Moscow-backed separatists have been fighting Kyiv since Russia’s first military intervention in Ukraine in 2014.