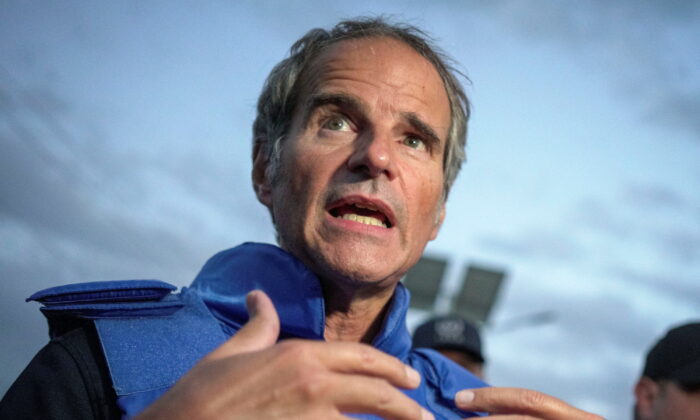 International Atomic Energy Agency (IAEA) Director General Rafael Mariano Grossi speaks with journalists after he and a part of the IAEA mission came back from a Zaporizhzhia nuclear power plant at a Ukrainian checkpoint in Zaporizhzhia region, Ukraine, on Sept. 1, 2022. (Anna Voitenko/Reuters)
Russia-Ukraine War

ZAPORIZHZHIA, Ukraine—Ukraine and Russia traded accusations over each others’ actions around the Zaporizhzhia nuclear power plant on Friday as a team of inspectors from the UN nuclear watchdog tried to check the safety of the facility and avert a potential disaster.

Ukraine’s state nuclear company said the International Atomic Energy Agency (IAEA) mission had not been allowed to enter the plant’s crisis center, where Ukraine says Russian troops are stationed, and would struggle to make an impartial assessment.

Russian Defense Minister Sergei Shoigu said Ukraine was continuing to shell the plant, raising the risk of a nuclear catastrophe.

The site, 10 kilometers (6 miles) from Ukrainian positions across the Dnipro river, was captured by Russian forces soon after they invaded Ukraine in late February and has become the focus of concern.

It has come under repeated shelling over the past month, with Kyiv and Moscow trading blame for the firing. The plant is still run by Ukrainian staff and Russia has rejected calls for it to withdraw its troops.

Speaking after the initial visit, Grossi said the physical integrity of the plant had been violated several times and he was worried by the situation there.

On Friday he said he expects to produce a report early next week, and two IAEA experts would stay on at the plant for the longer term.

“The Russians did not allow the mission to enter the crisis center, where Russian military personnel are currently stationed, whom the IAEA representatives were not supposed to see,” Energoatom said in a statement.

“The (Russian) occupiers lie, distort the facts and evidence that testify to their shelling of the power plant, as well as the consequences of damage to the infrastructure,” it said.

Ukrainian President Volodymyr Zelenskyy said the mission could still have a role to play despite the difficulties met.

“Unfortunately we haven’t heard the main thing from the IAEA, which is the call for Russia to demilitarize the station,” Zelenskyy said in a video streamed to a forum in Italy.

In Moscow, Defense Minister Shoigu rejected assertions by Kyiv and the West that Russia had deployed heavy weapons at the plant. He accused Ukraine of “nuclear terrorism” by shelling.

Shoigu repeated Moscow’s insistence that Kyiv would carry the responsibility for any escalation at the site.

He said Kyiv was “creating a real threat of nuclear catastrophe” and using Western-supplied weapons to attack the plant. He also accused the United States and European Union of “encouraging such reckless actions”.

One of the plant’s reactors was forced to shut down on Thursday due to shelling.

Russia’s ambassador to international institutions in Vienna said two IAEA inspectors would stay at the Zaporizhzhia plant on a permanent basis, the RIA Novosti news agency on Friday.

The IAEA’s Grossi said on his return to Ukrainian-held territory on Thursday that his experts would stay at the facility.

He had been able to tour the entire site, seeing key areas such as the emergency systems and control rooms. His team would now need to finish its analysis of technical aspects.

“We are not going anywhere. The IAEA is now there, it is at the plant and it is not moving – it’s going to stay there,” Grossi told reporters once he had crossed back into Ukrainian-held territory.

Those experts, he said, would provide what he called an impartial, neutral, technically sound assessment of what was happening on the ground.

The plant sits on the south bank of a huge reservoir on the Dnipro River that divides Russian and Ukrainian forces in central southern Ukraine. Before the war, it supplied more than a fifth of Ukraine’s electricity.