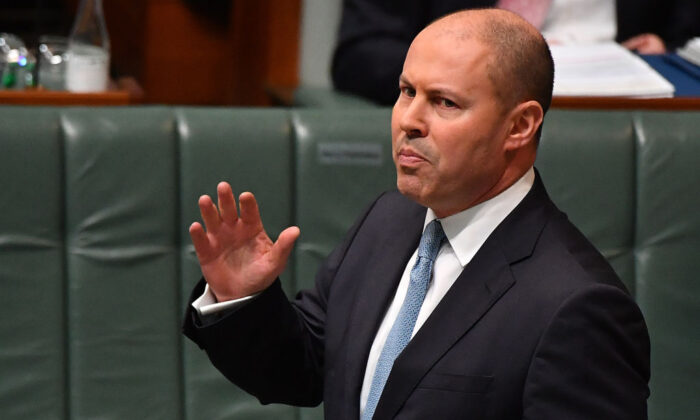 Treasurer Josh Frydenberg during Question Time in the House of Representatives at Parliament House in Canberra, Australia, on June 02, 2021. (Sam Mooy/Getty Images)
Australia

Australian Treasurer Josh Frydenberg has warned that the escalating hostilities between Ukraine and Russia will obstruct Australia’s economic recovery, as global oil prices rise to a seven-year high.

“This is not just going to have an impact in terms of the national security situation … But what it would have is a broader economic impact, too,” Frydenberg told Sky News on Feb. 22. “We’ve already seen the price spiked, and I think it would have a broader impact on the global financial system, on equity markets and stabilisation.”

Concern over the unrelenting rise in petrol prices is also denting consumer confidence despite the reopening of international borders and easing of COVID-19 restrictions in the two most populous states.

The ANZ-Roy Morgan weekly consumer confidence index fell 1.4 percent on the back of an increase in inflation expectations to the highest point in over seven years.

“Inflation expectations rose 0.1 [percentage points] to 5.1 percent last week, its highest since December 2014,” ANZ head of Australian economics David Plank said. “With petrol prices at record highs during the past few weeks the lift in inflation expectations is not surprising.”

“The expectations of higher inflation might have had a dampening effect on overall sentiment.”

The national average price for petrol in the week to Feb. 20 rose a further 2.2 cents to a new record high of 179.1 cents per litre, according to the Australian Institute of Petroleum.

The average price at the pump in the Northern Territory was the highest of any jurisdiction, hitting 191.1 cents per litre, followed by Tasmania and Queensland.

Commonwealth Securities Chief Economist Craig James estimates that the average household is now paying a record $250.74 a month for petrol, a rise of $67 over the last year.

Despite the rising inflation concerns, Frydenberg told businesses that they should not expect further economic assistance in the upcoming pre-election budget, as the country learns to live with COVID-19.

“Our way out of this crisis is not through more stimulus, but through confidently moving towards normalised economic settings,” he told Business South Australia in a speech. “We must let businesses get back to business.”

The focus is now shifting to reviving activity in Australia’s CBDs, with most Australian jurisdictions on track to lifting all restrictions.

“With double dose vaccination rates now above 94 percent and with the omicron wave having peaked, now is the time to begin safely returning to work in our cities,” Frydenberg said. “Revitalising our cities will be even more important as we begin welcoming overseas tourists back to Australia.”