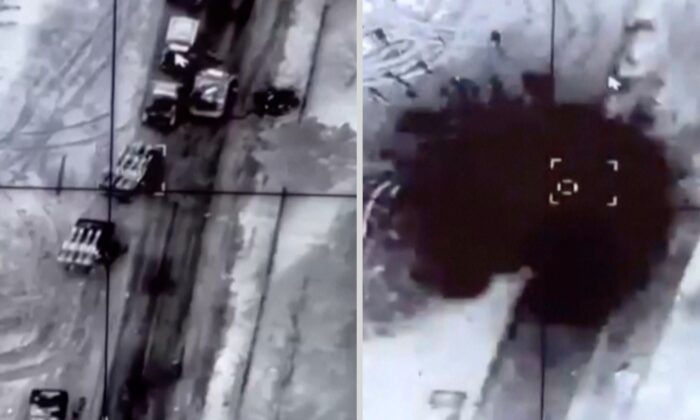 This combination of pictures taken from footage released by Valery Zaluzhny, the chief commander of the armed forces of Ukraine, shows a drone strike on a Russian missile system in the Zhytomyr region on Feb. 27, 2022. (Courtesy of Valery Zaluzhny via Reuters)
Russia-Ukraine War

A Ukrainian military official released footage on Feb. 27 that appears to show a missile system belonging to the Russian Armed Forces being destroyed by a Ukrainian drone.

Valery Zaluzhny, the chief commander of the armed forces of Ukraine, said on social media that a Turkish-made Bayraktar drone was used to destroy the Russian machinery in the area around the city of Malyn in the Zhytomyr region.

The Epoch Times could not independently verify the footage.

The Armed Forces of Ukraine acquired a dozen of the Turkish-made armed aerial vehicles in 2019 as part of the countries’ military modernization program. Praising the Bayraktar’s drone effectiveness in combat and success in military operations, Ukraine ordered six more in 2020.

Vasyl Bodnar, Ukraine’s ambassador to Ankara, said on Feb. 27 the drones were very efficient in the ongoing battle against Russian forces.

The drone is capable of flying up to 22,500 feet and loitering for more than 24 hours. It can also carry a maximum payload of more than 330 pounds.

Losses of the Russian occupying forces in Ukraine pic.twitter.com/MKHHIQ3xot

The Ukrainian Ministry of Foreign Affairs claimed in its latest update on Monday that armed forces have killed and wounded 4,500 Russian personnel and destroyed 816 armed vehicles of various types, 29 aircraft, 29 helicopters, 191 tanks, and 291 vehicles, among some other types of Russian military equipment.

“Ukraine is inflicting disastrous losses on the enemy,” the government agency said.