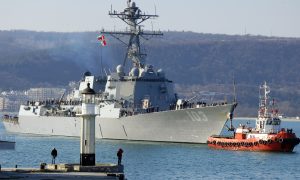 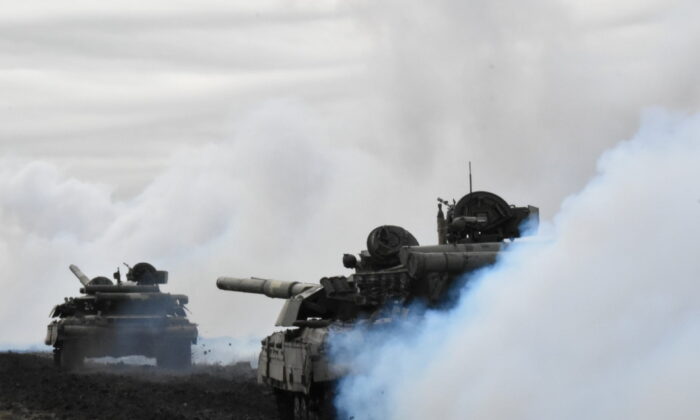 Tanks of the Ukrainian Armed Forces are seen during drills at an unknown location near the border of Russian-annexed Crimea, Ukraine, on April 14, 2021. (Press Service General Staff of the Armed Forces of Ukraine/Handout via Reuters)
Europe

KYIV—Ukraine’s armed forces rehearsed repelling a tank and infantry attack near the border of Russian-annexed Crimea on Wednesday, the Ukrainian military said in a statement.

The drills came a day after U.S. President Joe Biden phoned Russian President Vladimir to discuss a build-up of Russian troops near eastern Ukraine and in Crimea, among other U.S. concerns.

Russia seized Crimea from Ukraine in 2014 and fighting has increased in recent weeks in eastern Ukraine, where government forces have battled Russian-backed separatists in a seven-year conflict that Kyiv says has killed 14,000 people.

The Ukrainian military said it had deployed tanks and artillery in Wednesday’s drills to practice repelling a force of tanks and infantry trying to break through its defenses.

It posted video footage, set to rock music, of Ukrainian tanks maneuvering in formation and of soldiers loading and firing artillery pieces.

Russian Defense Minister Sergei Shoigu said on Tuesday that Moscow’s military build-up near Ukraine was part of a large snap drill meant to test combat readiness and respond to what he called threatening military action by NATO.

Shoigu said that the three-week exercise, which he called successful, was due to wrap up in the next two weeks.

Shoigu said NATO was deploying 40,000 troops and 15,000 pieces of military equipment near Russia’s borders, mainly in the Black Sea and the Baltic regions.

The Western alliance denies any such plans.