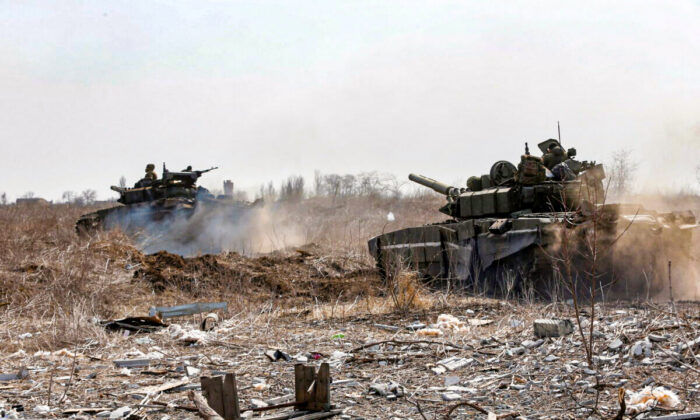 Service members of pro-Russian troops are seen atop of tanks during Ukraine-Russia conflict on the outskirts of the besieged southern port city of Mariupol, Ukraine, on March 20, 2022. (Alexander Ermochenko/Reuters)
Russia-Ukraine War

Ukrainian officials said that the country has rejected Russia’s demand to surrender the eastern port city of Mariupol by 5 a.m. Moscow time on March 21 in exchange for safe passage of residents out of the city.

“There can be no question of any surrender, laying down of arms,” the Ukrainska Pravda news portal cited Ukraine’s Deputy Prime Minister Iryna Vereshchuk as saying. “We have already informed the Russian side about this.”

“I wrote: ‘Instead of wasting time on eight pages of letters, just open the corridor.'”

Earlier on Sunday, Pyotr Andryushenko, who is an adviser to the mayor of Mariupol, said that Russia’s promises regarding humanitarian corridors could not be trusted, and vowed that the city would continue to defend itself against the Moscow-led invasion.

“We will fight until the last of our soldiers,” he told the BBC’s Newshour.

Andryushenko also doubled down on claims made by Mariupol officials in recent days that Russian forces have been forcibly deporting several thousand residents from the Ukrainian city to Russia. The Epoch Times could not independently verify the claims.

“When they [Russian forces] say about humanitarian corridors, what do they really do? They really force evacuate our people to Russia,” Andryushenko said.

Mariupol, a strategically important target for Russia, has seen heavy Russian shelling in recent weeks amid the Moscow-led invasion of Ukraine that began on Feb. 24.

Located on the Sea of Azov, the city could serve as a land corridor between the eastern regions of Donetsk and Luhansk that are controlled by Moscow-backed separatists, and Crimea, which Moscow annexed in 2014.

Russian troops have encircled the city over the past few weeks, leaving many of its 400,000 residents trapped inside with little if any food, water, and power.

Roman Hryshchuk, a Ukrainian member of Parliament, cited the deputy mayor of Mariupol as saying that between 80-90 percent of the city has been destroyed and that “there is no building without damage.”

A steady barrage of Russian shelling has also hindered previous evacuation efforts. Last week, a theater in the city sheltering thousands of people was hit by a powerful Russian air strike.

Citing Ukrainian Parliament member Serhiy Taruta, the Ukrainian Ministry of Culture and Information said in a Twitter post on Thursday that the bomb shelter underneath the Mariupol Drama Theatre had survived the shelling and “people are coming out alive as the rubble is being cleared.”

However, on Sunday, authorities in Mariupol said that an art school sheltering around 400 people had also been attacked by Russia’s military. Officials did not state how many casualties have been reported.

Russia on Sunday urged Ukrainian forces to lay down arms in the besieged port city, adding that a “terrible humanitarian catastrophe” was unfolding.

“Lay down your arms,” Colonel-General Mikhail Mizintsev, the director of the Russian National Center for Defense Management, said in a briefing distributed by the defense ministry.

“A terrible humanitarian catastrophe has developed,” Mizintsev said. “All who lay down their arms are guaranteed safe passage out of Mariupol.”

Mizintsev said humanitarian corridors for civilians would be opened eastwards and westwards out of Mariupol at 10 a.m. Moscow time on Monday and that Ukraine has until 5 a.m. Moscow time to respond to the offer.