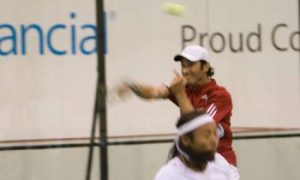 KYIV, Ukraine—Ukraine fell short on Tuesday of raising the $1 billion it needs to build a new shield around the Chernobyl reactor, which is still emitting dangerous levels of radiation 25 years after it exploded. The announcement came during a world summit in Kyiv on the future of nuclear safety across the globe.

While the host country only received about $790 million, or under 80 percent of what it had hoped for, because the shield is expected to take five years to build, there’s still a buffer to raise the rest.

The single biggest country donor was the United States at $123 million, with the U.K., France, and Russia also kicking in large sums. The European Commission gave $158 million and the European Bank for Reconstruction and Development another $172 million.

Japan, which had invested in maintaining the current shield, declined to contribute this time given its own debilitating nuclear disaster at home.

The current steel and concrete sarcophagus that surrounds the No. 4 reactor at Chernobyl was hastily erected in the aftermath of the April 26, 1986, accident since workers could only be exposed to the radiation in short spurts. Since then, it has required considerable maintenance as cracks have developed due to weathering and the poor construction at the outset.

The new cover will be much larger, about as long as two football fields, and its arched roof twice as high as the Statue of Liberty, at about 350 feet. But because it’s still too dangerous to build at the plant site itself, it is being constructed nearby and will be rolled into place, where it will stay for the next 100 years.

In addition to the new pledge of $158 million, the EU has already allocated about $674 million for Chernobyl’s related projects, mainly for nuclear safety and helping local people and affected families get access to quality health care.

"Recent events in Fukushima, Japan, have also reminded us of the danger this issue may represent," said EU Commission President Jose Manuel Barroso.

However, the Chernobyl crisis liquidators, the men who worked at the plant after the melt down, are still fighting legal battles for appropriate compensation, pensions, and medical care, which they are entitled to under Ukrainian law.

Recently, Yanukovych admitted to these problems, but said that paying off Chernobyl victims is an huge economic burden for the country costing approximately $8 billion a year.

Many representatives spoke about the need to find the balance between nuclear power and nuclear safety. The EU called for applying stress tests to identify safety flaws of the kind it has already started carrying out across the Union.

“The time has come to strengthen the capacity of the IAEA in the further development and universal application of the highest possible nuclear safety standards,” said the U.N. General-Secretary Ban Ki-moon.

Ban also said he would launch a U.N. systemwide study on consequences of the accident at the Fukushima Daiichi plant that has been leaking radiation steadily since it was damaged in the March 11 earthquake and tsunami.

First steps toward drafting stricter safety measures for nuclear power plants will be taking place at an IAEA ministerial conference in June.