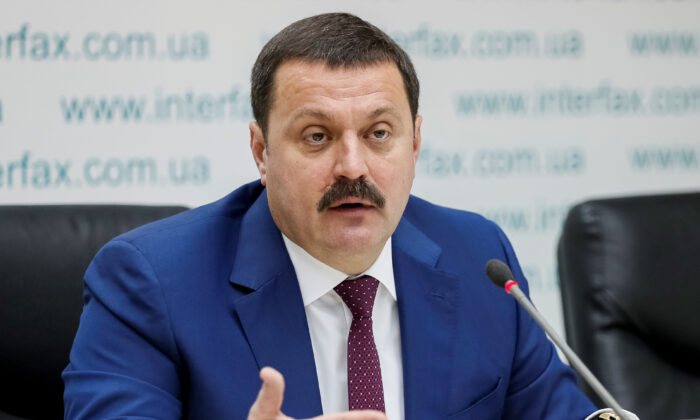 An independent Ukrainian lawmaker said on Dec. 5 he had met President Donald Trump’s personal lawyer in Kyiv to discuss the alleged misuse of American taxpayer money by Ukrainian state bodies.

In a statement on Facebook accompanying photos of the meeting, Andriy Derkach said he and Rudy Giuliani discussed creating an interparliamentary group to fight corruption.

Giuliani, Trump’s lawyer, traveled to Budapest, Hungary, and Kyiv this week to meet with current and former Ukrainian officials for a documentary series.

Giuliani could not be reached for immediate comment. He said on Dec. 3 that he was “working on an important project” with One America News Network, a broadcaster based in San Diego, that was “intended to bring before the American people information” that House Intelligence Chairman Adam Schiff (D-Calif.) “covered up.”

Ukraine is central to the impeachment inquiry against Trump because of allegations that the president abused his power to pressure its Ukrainian President Volodymyr Zelensky to investigate former Vice President Joe Biden and Biden’s son, Hunter Biden.

Joe Biden in 2016 threatened to withhold $1 billion from Ukraine unless then-President Petro Poroshenko ousted Viktor Shokin, the country’s top prosecutor who was investigating Hunter Biden’s employer Burisma. Shokin resigned under pressure and his replacement closed the investigation. The current top prosecutor is reviewing the case.

Democrats say Trump’s request to Zelensky to “look into” allegations of corruption surrounding the Bidens amounted to an attempt to interfere in the 2020 election since the elder Biden is vying for the Democratic presidential nomination. They also allege that Trump’s withholding of congressionally-approved military aid at the time amounts to bribery, though both Ukrainian and American officials, including Zelensky, say Ukraine wasn’t aware of the hold until the next month.

Derkach, the Ukrainian lawmaker who met with Giuliani, held a press conference in November making explosive unverified allegations against Burisma and the Bidens, including that $16.5 million received by Hunter Biden as payment from Burisma was stolen from Ukrainian citizens. Details he talked about were cited by Trump’s lawyer as evidence in his criticisms of the Biden family.

Derkach said in a statement after meeting Giuliani, “Unfortunately, our country has been at the center of scandals about international corruption.”

“Among other things, there are facts about the inefficient use of American taxpayers’ money by representatives of Ukrainian state bodies,” he added on Facebook on Thursday.

Giuliani‘s trip coincided with an apparently unconnected visit to Kyiv by Philip Reeker, the acting U.S. assistant secretary of state for European and Eurasian affairs.

Reeker has testified in the impeachment inquiry, claiming Giuliani and others close to Trump played an “irregular” role in U.S. policy toward Ukraine.

Reeker met the new Prosecutor General Ruslan Ryaboshapka for what the U.S. Embassy said was a discussion about reforms.

Ryaboshapka’s office is closely watched in the context of the impeachment inquiry because it would make a decision on whether or not to launch an investigation into the Biden family in connection to Burisma. Ryaboshapka has previously said he had no evidence of wrongdoing on Hunter Biden’s part. Ryaboshapka said last month Ukraine was deepening its probe into the founder of Burisma.

It was not immediately clear whether Giuliani would meet any officials in Zelensky’s administration on his visit. Zelensky’s office did not respond to a request for comment.

Giuliani also met former Prosecutor General Yuriy Lutsenko, according to pictures posted on Twitter and a statement on Facebook by Lutsenko’s spokeswoman. While he was prosecutor general, Lutsenko privately met Giuliani twice this year: in New York in January and later somewhere in Poland.