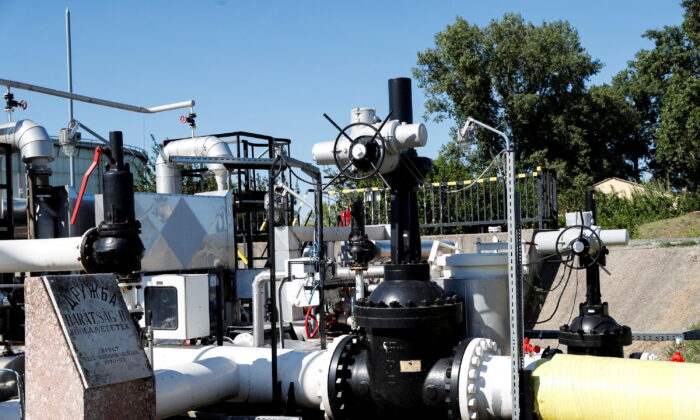 The receiver station of the Druzhba oil pipeline between Hungary and Russia is seen at the Hungarian MOL Group's Danube Refinery in Szazhalombatta, Hungary, on May 18, 2022. (Bernadett Szabo/Reuters)
Gold and Commodities

Benchmark Brent crude oil jumped by $2 per barrel to trade near $98 as the news added to concerns about reduced energy supplies.

Flows along the southern route of the Druzhba pipeline have been affected while the northern route serving Poland and Germany remains uninterrupted.

The suspension of pipeline flows on Tuesday will hit countries such as Slovakia, Hungary, and the Czech Republic, which all rely heavily on Russian crude and have limited ability to import alternative supply by sea.

The fact that refiners have to import seaborne oil on such short notice will make the job to secure alternative supply even more difficult in an already tight oil market, traders said.

Hungarian energy firm MOL and Slovak pipeline operator Transpetrol confirmed flows have been halted for a few days over the payment of transit fees.

MOL said it had reserves for several weeks and was working on a solution.

Hungary is one of the most reliant countries on Russia oil and its government has been lobbying hard to give it exemption from wider EU sanctions on Moscow.

Russia’s Transneft said it made payments for August oil transit to Ukrainian pipeline operator UkrTransNafta on July 22, but the money was returned on July 28 as the payment did not go through.

It said the shipments were halted from Aug. 4.

Transneft said in a statement that Gazprombank, which handled the payment, told it the money was returned because of European Union restrictions.

Under the new sanctions, European banks have to receive approval from a relevant government authority instead of deciding by themselves whether to allow a transaction, Transneft said.

It added that European regulators had yet to decide on algorithms for all the banks, which complicates the dealings.

Transneft is considering alternative payment systems, but had sent a request for the transaction to be allowed, the pipeline monopoly said.

Hungary’s MOL and Unipetrol, controlled by PKN Orlen, are the main buyers of oil via the Druzhba route, also known as the Friendship pipeline, while Russia’s Lukoil, Rosneft and Tatneft are the main suppliers of oil.

UkrTransNafta did not respond to a request for comment.

Since March, Hungary, Slovakia, and the Czech Republic have relied extensively on supplies of Russian Urals crude via the Druzhba pipeline and reduced their purchases of maritime crude.

A decline in European demand for Russian oil since Russia invaded Ukraine at the end of February has pushed the value of seaborne Urals, which serves to price Druzhba deliveries, to the widest discount in history against the dated Brent benchmark.

Moscow refers to the invasion as a “special military operation.”

Russia normally supplies about 250,000 barrels per day (bpd) via the southern leg of the Druzhba pipeline.

Russia, the world’s second biggest oil exporter and leading gas exporter, has already reduced gas pipeline flows to many EU members, citing problems with turbine maintenance on the Nord Stream 1 pipeline as well as sanctions against some buyers Moscow describes as “unfriendly.”