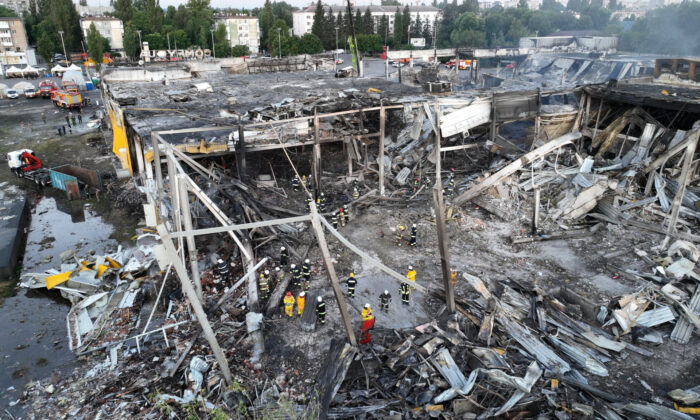 Rescuers work at a site of a shopping mall hit by a Russian missile strike, in Kremenchuk, in Poltava region, Ukraine, in this handout picture released on June 28, 2022. (Press service of the State Emergency Service of Ukraine/Handout via Reuters)
Russia-Ukraine War

KREMENCHUK, Ukraine—Firefighters searched on Tuesday for survivors in the rubble of a Ukrainian shopping mall, where authorities said 36 people were still missing after a Russian missile strike that killed at least 18.

The attack, in the central city of Kremenchuk far from any frontline, drew a wave of global condemnation.

Ukraine claimed Moscow had killed civilians deliberately. Russia said it had struck an arms depot and claimed the mall was empty.

Ukrainian President Volodymyr Zelenskyy accused Russia of deliberately targetting civilians in “one of the most defiant terrorist attacks in European history.”

Russia’s defence ministry said its missiles had struck an arms depot storing Western weapons, which exploded, causing the blaze that spread to the nearby mall. Kyiv said there was no military target in the area, including at a nearby factory that was also hit.

Leaders of the Group of Seven (G7) countries, at a summit in Germany, said the attack was “abominable.” Russian President Vladimir Putin and those responsible will be held to account, they said in a statement.

Western countries have imposed economic sanctions on Russia, but so far have failed to curtail Moscow’s main source of income, oil and gas export revenue, which has actually increased as the threat of supply disruption has propelled global prices.

The attack on Kremenchuk, which lies about 330 km (200 miles) from Kyiv, comes after days of increasing Russian missile strikes far from the frontline, including the first attacks on the capital Kyiv for weeks.

Moscow has also stepped up shelling of Kharkiv, Ukraine’s second-largest city. The Kharkiv governor said five people were killed and 22 wounded in shelling on Monday.

The U.N. Security Council, where Moscow wields a veto, will meet on Tuesday at Ukraine’s request following the Kremenchuk attack. U.N. spokesperson Stephane Dujarric said the missile strike was deplorable.

On the battlefields of the Donbass region, Ukraine endured another tough day following last week’s loss of the now-ruined city of Sievierodonetsk.

Russian forces are trying to storm Lysychansk, across the Siverskyi Donets River from Sievierodonetsk, to complete their capture of Luhansk Province, one of two eastern regions Moscow aims to conquer on behalf of separatist proxies.

Ukrainian forces still controlled the city but its loss was possible as Russia poured resources into the fight, he added.

“They really want this and a lot of reserves are being thrown just for this,” he told Reuters. “We do not need to lose an army for the sake of one city.”

Rodion Miroshnik, ambassador to Moscow of the Luhansk separatists, said Russian and separatist troops were advancing westward into Lysychansk and street battles had erupted around the city stadium. Fighting was going on in several surrounding villages, and the pro-Russian fighters had entered an oil refinery where Ukrainian troops were concentrated, he said.

The advances in Luhansk have given Moscow its biggest victories in weeks, playing to Russia’s strength in overwhelming artillery firepower that can demolish cities in its path.

But Ukraine still hopes to turn the tide with a counterattack once Moscow exhausts its invading forces in costly battles that yield slow gains. Kyiv has begun to receive more advanced Western weapons, including rockets that can hit targets far behind the front.