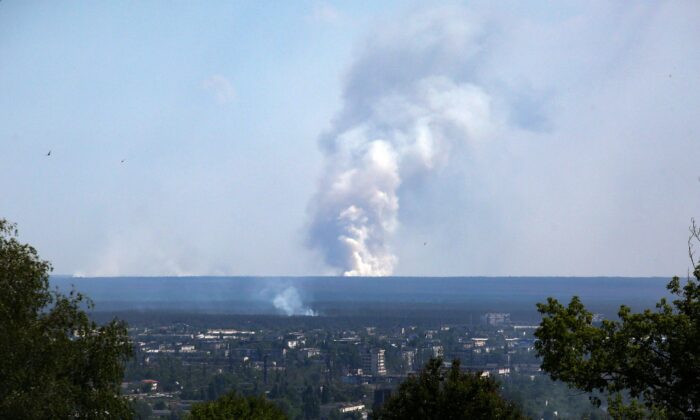 A large plume of smoke rising on the horizon, behind the town of Severodonetsk, in this picture taken from the town of Lysychansk on June 21, 2022. (Anatolii Stepanov/AFP via Getty Images)
Russia-Ukraine War

KYIV—Ukraine has detained a senior government official and a business leader suspected of being part of an alleged Russian spy network, the Security Service of Ukraine said on Tuesday.

The Security Service (SBU) did not name the two suspects but identified them as a senior official in the Secretariat of the Cabinet of Ministers and a department head at the Chamber of Commerce and Industry, a business lobby.

It said in a statement on the Telegram app that it had carried out a “multi-stage special operation” to neutralize the alleged spy ring.

“As a result: in Kyiv, the head of a department of the Secretariat of the Cabinet of Ministers and the head of one of the directorates of the Chamber of Commerce and Industry were detained,” the SBU said.

“These officials passed on various intelligence information to the enemy: from the state of our defense capability to arrangements at the state border and personal data of Ukrainian law enforcement officers.”

Russia did not immediately comment on the SBU statement.

The two main suspects were shown sitting in front of a Ukrainian flag in a video and saying they had collaborated with Moscow, with whom Ukraine has been at war since Russia invaded its neighbor on Feb. 24.

It was not immediately clear whether they spoke under duress.

The SBU said Russia paid the suspects from $2,000 to $15,000 per task, depending on the level of secrecy and the importance of the information. One of the men said in the video he had received a total of $33,000 for his activities, and the other said he received $27,000.