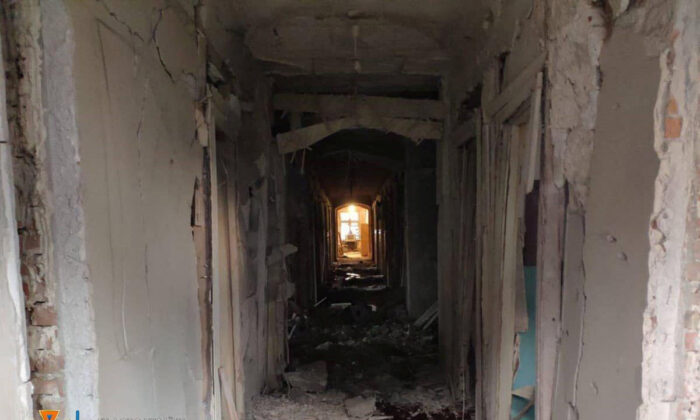 An interior view shows a building damaged by a Russian military strike, in location given as Marhanets town, in Dnipropetrovsk region, Ukraine, on Aug. 10, 2022. (Press service of the State Emergency Service of Ukraine/Handout via Reuters)
Russia-Ukraine War

KYIV—Ukraine on Wednesday accused Russia of exploiting its capture of a nuclear power plant to fire rockets from the site at a nearby town in an attack that killed at least 13 people and wounded many others.

The town Ukraine says Russia targeted—Marhanets—is one that Moscow has alleged its enemies have used in the past to shell Russian soldiers stationed at the Zaporizhzhia plant, which they captured in March.

Ukraine and Russia have accused each other of imperiling the plant—Europe’s largest nuclear complex—with attacks nearby.

After the United Nations’ atomic energy watchdog sounded the alarm over a potential nuclear disaster, the Group of Seven leading industrialized countries on Wednesday told Russia to hand back the plant to Ukraine.

There are no indications that their demand will sway Moscow, which on Wednesday received powerful endorsement of its rationale for the Feb. 24 invasion from China, which has been conducting military drills of unprecedented intensity around self-ruled Taiwan.

Beijing’s ambassador to Moscow, Zhang Hanhui, accused Washington of backing Russia into a corner with repeated expansions of the western-led NATO military alliance and support for Ukraine’s alignment with the European Union.

There was no immediate comment from Russia on the Ukrainian allegations of an attack on Marhanets and Reuters could not independently verify Kyiv’s version.

Andriy Yermak, President Volodymyr Zelenskyy’s chief of staff, claimed Russia was launching attacks with impunity from Zaporizhzhia knowing it was risky for Ukraine to fight back.

Ukraine says around 500 Russian troops with heavy vehicles and weapons are at the plant, where Ukrainian technicians continue to work.

Ukraine’s state nuclear power firm has warned that containers with radioactive material might be shelled and said it is vital Kyiv retake the plant by winter.

Russia says its forces are behaving responsibly and ensuring the complex’s safety.

Britain, which is helping Ukraine with arms, intelligence, and training, said on Wednesday it believed Russia had “almost certainly” established a major new ground force to back its war.

The new 3rd Army Corps was based in the city of Mulino, east of Moscow, the British Defence Ministry said in an intelligence bulletin. However, Russia would struggle to build up the numbers needed and the new force is unlikely to sway the war, it claimed.

The origin of a series of explosions at a Russian air base in Russian-annexed Crimea on Tuesday remained contested: Moscow says ammunition stores detonated.

Zelenskyy did not mention the blasts in his latest video address, but said it was right to focus on Crimea. “We will never give it up,” he said.