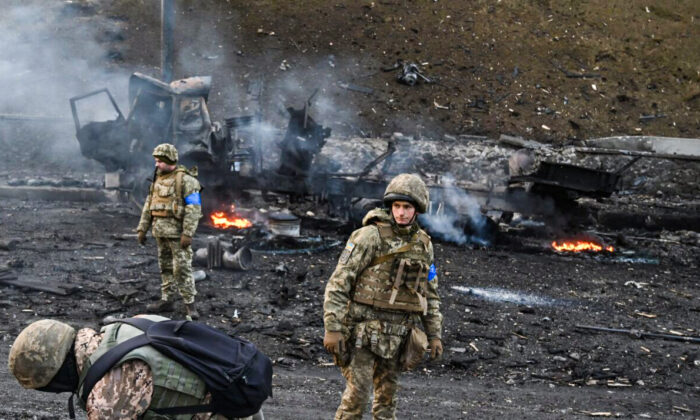 Ukrainian service members look for and collect unexploded shells after fighting with a Russian raiding group in the Ukrainian capital of Kyiv on Feb. 26, 2022. (Sergei Supinsky/AFP via Getty Images)
Thinking About China

Ukraine: A Cautionary Tale for China?

Could a Russian victory in Ukraine embolden China to invade Taiwan? Certainly many think so. But Moscow’s experiences in Ukraine are more likely to serve as a cautionary tale for Beijing when it comes to contemplating military operations against Taiwan.

Russia’s botched invasion of Ukraine has many lessons for China. The first and most important, perhaps, is you had better win quickly. Increasingly, wars are decided rapidly—within days, if not hours. Russia’s failure to deliver a fatal blow to Ukraine—in particular, by occupying Kyiv or Kharkiv—in the first 48 hours has proved disastrous.

The same adage could apply to a Chinese invasion of Taiwan. If the People’s Liberation Army (PLA) is unable to neutralize Taiwan’s defenses in the first hours of a war and secure a safe beachhead on the island, it could easily lose momentum and the advantage of surprise.

The second lesson of Ukraine is don’t count on conscripts. Russia’s conscript system is a disaster. During the Soviet era, when conscription was for two years, new conscripts were frequently subjected to physical and mental abuse by their second-year counterparts. Now, conscription is down to 12 months, of which more than half is devoted to training. The hazing has not ended, either.

Many Russian conscripts used in Ukraine have less than a few months of training. Some had no idea that they were being sent into combat. Confusion among the troops is rife, and morale is understandably low.

There is no substitute for a professional volunteer military. It is more than a matter of commitment and morale; long service contracts and a professional attitude toward soldiering are critical requirements when it comes to training up and running a modern high-tech military.

The PLA needs to remember this, when it relies on conscription to fill at least a third of its ranks. (So does Taiwan, for that matter, which recently reduced its period of national service to just four months.)

Thirdly, Russia’s attack on Ukraine shows that logistics are king. Probably because Russian President Vladimir Putin thought it would all be over in a few days, his lightly provisioned forces quickly ran out of food and fuel. Hungry troops can very quickly lose the will to fight. Poor logistics likely also explains why Russia’s 40-mile-long convoy of tanks, armored vehicles, and towed artillery has been stalled outside Kyiv.

This could be especially important for the PLA in an invasion of Taiwan. Beyond its first wave of attacks, it would have to create a safe and sustainable supply line over a 110-mile Taiwan Strait in order to maintain its operations. Sea mines, missiles, long-range artillery, and aircraft equipped with anti-ship missiles would greatly complicate PLA logistics. Amphibious supply ships would be particularly susceptible to missile strikes.

Another lesson that Russia is learning is that you shouldn’t expect to be welcomed as “liberators.” Moscow has been stunned to see how much resistance it has gotten from Ukrainian citizens. In a case of believing its own propaganda, Russia’s leaders never believed that there could such a thing as a Ukrainian patriot, especially one that was willing to fight a heavily armed foe. And yet, tens of thousands of everyday Ukrainians, many of whom have never fired a gun, have volunteered for militias. They are digging trenches, installing anti-tank barriers, and making Molotov cocktails.

The Chinese regime should not be surprised to see the same pushback should it attack Taiwan. It may sound cliché, but free people do not submit quickly or easily to tyranny. The people of Taiwan have developed a strong sense of being “Taiwanese,” and this could motivate them to fight back hard.

Another lesson is you can win but still lose. Recent history (Iraq, Afghanistan) has shown that it is easier to win the war than win the peace. An invading force can occupy key cities, but it cannot control them 24 hours a day. It is even worse in the countryside.

Whether Russia occupies Ukraine or installs a puppet regime, it is unlikely that the Ukrainians will lightly acquiesce to either. Expect a lot of resistance, and perhaps even guerilla warfare. China could find it equally hard to swallow Taiwan.

Finally, beware the law of unintended consequences. Putin believed that the West was splintered and that Western support for Ukraine was weak. Certainly he had good reason to think so. As president, Donald Trump seriously undermined NATO unity. He called for removing U.S. troops from Germany, and he frequently discussed withdrawing from the Atlantic alliance altogether. He also withheld $400 million dollars in U.S. aid to Ukraine, in an effort to force Zelensky to open a partisan investigation of Joe Biden’s family. Western autocrats such as Hungary’s Orban and Turkey’s Erdogan also cozied up to Putin.

This changed literally overnight after Putin invaded Ukraine. His actions have reaped a whirlwind. Germany doubled its defense budget for the year, while Poland announced that it would increase its military spending to 3 percent of GDP. Both neutral Sweden and Finland have begun to openly discuss the idea of joining NATO.

Moreover, business ties with the West that Russia spent decades building were shattered in a few days, leaving the national economy in shambles. Most Western companies have pulled out of investments in Russia or have stopped shipping high-tech goods, such as semiconductors and aircraft engines, to Russian factories. This is crippling the country’s microelectronics industry and set back its efforts to break into the commercial airliner sector.

When it comes to assaulting Taiwan, China should have no delusions either about Western solidarity. Attacks against a country that threatens no one earns the opprobrium of the world. Of course, Taiwan has little diplomatic recognition, but most countries around the world would probably rally to its side.

Beijing should not be encouraged by Putin’s attack on its smaller, non-threatening neighbor. If anything, Putin’s fiasco in Ukraine should caution China that such military operations are much more difficult—and much more prone to military and political disaster—than one might think.