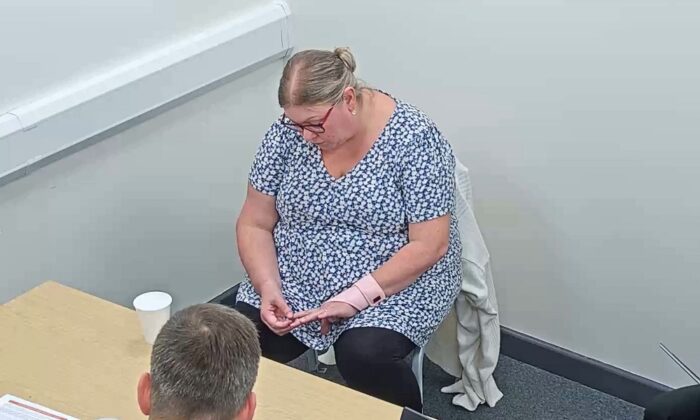 Laura Castle during a police interview at a police station in Cumbria, England, in January 2021. (Cumbria Police/PA Media)
UK

An English woman who exchanged grotesque messages with her husband has been jailed for life for murdering a 13-month-old child she was hoping to adopt.

Laura Castle, 38, was told by a judge on Wednesday she would have to spend a minimum of 18 years behind bars for the murder of Leiland-James Corkill, who had been placed with the couple five months before his death in January 2021.

Leiland-James suffered catastrophic head injuries which Castle tried to claim he must have suffered when he fell from a sofa onto a laminate floor.

He was a “looked-after child” who was taken into care at birth and Cumbria County Council’s social services department then agreed to let him be looked after by the Castles at their house in Barrow-in-Furness in August 2020 with a view to them adopting him.

In a letter to the judge, his biological mother, Laura Corkill, described Castle as a “monster.”

On Jan. 6, 2021 Castle rang for an ambulance and claimed Leiland-James had fallen off a sofa and hit his head while she was out of the room for a moment.

He died in hospital the next day and police were called in after staff at the hospital raised concerns about her account of what had happened.

Castle stuck to her account that it was an accident until the start of the trial when she entered a plea of guilty to manslaughter and claimed she had shaken Leiland-James because he would not stop crying, and he then hit his head on the sofa and fell onto the floor.

But medical experts testified that her new account of his death still did not explain his injuries, which were likely to have occurred from him being thrown against a hard surface.

Prosecutor Michael Brady QC said she had lost her temper and smashed the boy’s head against a piece of furniture.

The trial heard that in November 2020 social workers considered taking the child off her because she was struggling to bond with him but she persuaded them against it.

Sentencing her, Mr. Justice Baker said it was “nothing less than a tragedy” that she had not returned the child and he said she had caused “dreadful emotional upset” to Leiland-James’s birth mother.

An independent review into the adoption process is due to be published in July.