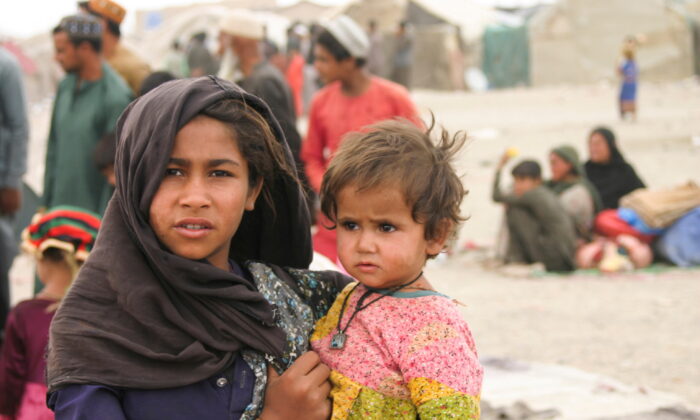 Siblings who arrived from Afghanistan with their families are seen at their makeshift tents as they take refuge near a railway station in Chaman, Pakistan, on Sept. 1, 2021. (Saeed Ali Achakzai/Reuters)
UK

UK Will Pay to Shelter Refugees in Countries Neighbouring Afghanistan

LONDON—Britain said on Friday it would release £30 million ($41 million) of aid to support nations neighbouring Afghanistan dealing with refugees fleeing the country since the Taliban took control.

The British government said £10 million ($13 million) would immediately be made available to the U.N. refugee agency UNHCR and other humanitarian groups to help with shelters and sanitation facilities at the borders.

The remainder will go to nations that experienced a significant number of refugees to provide essential services and supplies, it said.

“It is vital that we help those fleeing Afghanistan and do not allow the crisis there to undermine regional stability,” British foreign minister Dominic Raab said.

The UNHCR has said up to half a million Afghans could flee their homeland by the end of the year. Many fleeing the country are believed to be heading to Pakistan, while another of Afghanistan’s neighbours Tajikistan has pledged to accept 100,000 refugees.

Britain itself has said it would take some 20,000 Afghan refugees with 5,000 expected to arrive in the first year.

Earlier this month, Britain announced it would double its humanitarian and development aid to Afghanistan to $286 million ($395 million) this year, and Raab said on a visit to Qatar on Thursday there was a need to engage with the Taliban.