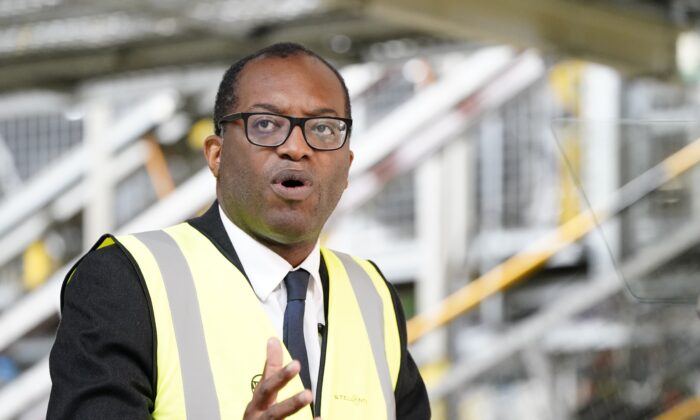 Kwasi Kwarteng, secretary of state at the Department of Business, Energy, and Industrial Strategy, speaking during a press conference in Cheshire, England, on July 6, 2021. (Peter Byrne/PA)
UK

Industry leaders hoping to get financial aid over the energy crisis had their hopes dashed on Sunday as the Treasury denied having been in talks with the Department for Business.

A source from the Treasury told The Epoch Times that there have been no such talks, contradicting what Business Secretary Kwasi Kwarteng said during an earlier interview.

Speaking to Sky News on Sunday morning, Kwarteng said he had been speaking to “government colleagues, particularly in the Treasury,” to figure out what can be done to help energy-intensive industries.

On the BBC’s “The Andrew Marr Show,” Kwarteng also said he had been working “very closely” with Chancellor of the Exchequer Rishi Sunak.

“I’ve not asked for billions. We’ve got existing schemes, I’m working very closely with Rishi Sunak, the chancellor, to get us through this situation,” he said.

While individual consumers are protected from soaring European gas prices by a government-imposed retail price cap, energy-intensive companies have found themselves struggling to keep production going.

Gareth Stace, director general at UK Steel, warned on Sunday of possible “long-term damage” to the industry because of the energy crisis.

The industry body head said that for some UK steelmakers, “longer and more frequent pauses in production are becoming a fact of life” as the industry faces “energy prices five times higher than the average of last year, in addition to remarkable price volatility.”

Urging the government to support the sector, Stace said the energy price hike could result in “extended shutdowns, damage to equipment, loss of export opportunities and market share at home, and a loss of talent and employment” in the winter months.

Since Sept. 7, nine energy suppliers in the UK have failed. Emma Pinchbeck, chief executive of Energy UK, told Sky News’s “Trevor Phillips On Sunday” programme that the industry is likely to see “more failures in the coming weeks.”

Apart from the cost for individual consumers, Pinchbeck said the energy industry is also worried about their commercial customers, ranging from “your local corner shop through to manufacturers of steel.”

“So I think it’s right [Kwarteng] is talking to the energy-intensive users but we would also like to see a bit of a focus on commercial customers as a whole, and thinking imaginatively about each kind of commercial customer and what sort of support they might need,” she said.

With Prime Minister Boris Johnson on holiday, the Labour Party accused the government of having “put its out-of-office on” while “in the teeth of a crisis of its own making.”

Shadow chief secretary to the Treasury Bridget Phillipson said, “The prime minister has gone on holiday, no one knows where the chancellor is, and this morning we understand the business secretary has entered the realms of fantasy.”

Some Tory MPs are among those calling for additional help for energy-intensive industries, such as steel manufacturing, during the crisis.