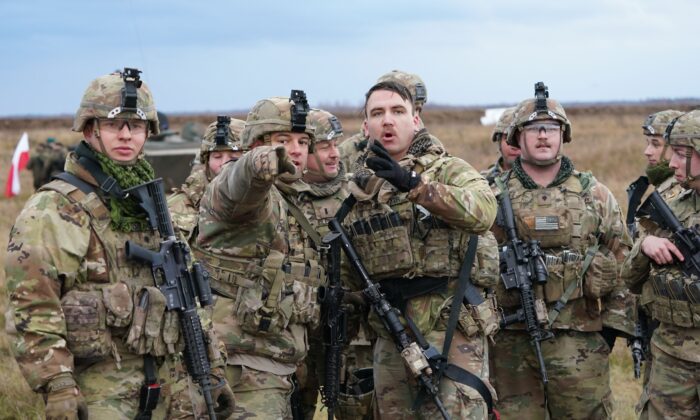 Britain will deploy more troops to Poland’s border with Belarus to help tackle the migrant crisis, which Western governments say has been orchestrated by the Lukashenka regime, British media have reported.

Thousands of illegal immigrants, mostly from Iraq and Afghanistan, have gathered on the Poland–Belarus border in hopes of crossing into the European Union. The EU has accused Minsk of orchestrating the crisis to put pressure on the bloc in an act of revenge for sanctions over a clampdown on Belarusian protests in 2020 against the contested reelection of President Alyaksandr Lukashenka.

Britain’s Ministry of Defence announced on Nov. 12 that it was sending a small contingent of UK armed forces personnel to Poland to provide engineering support at the border.

The Daily Telegraph reported on Thursday that Britain will send about 100 more soldiers from the Royal Engineers to help reinforce the Polish border, though details of the deployment are still being worked out.

.@BWallaceMP please accept my high appreciation for the fruitful cooperation and allied support so far. I express my thanks for the help that 🇬🇧 has declared in the scope of the situation we are dealing with on the 🇵🇱-🇧🇾 border and for the presence of 🇬🇧 engineers military troops pic.twitter.com/SnzZLe6JzD

Błaszczak expressed his “high appreciation for the fruitful cooperation and allied support,” and thanked the UK for its support, including the presence of British military engineers on the Poland-Belarus border.

“Can you imagine going from Iraq, to here, onto a border, not much clothes, not much food, not much money, and then being a pawn in the Belarusian leader’s game? I think that’s heartless and I think it is cruel,” he told The Telegraph.

In an article published in The Sunday Telegraph, UK Foreign Secretary Liz Truss urged Russian President Vladimir Putin to intervene to halt what she called the “shameful manufactured migrant crisis.”

Truss said Russia has a “clear responsibility” to press Belarusian authorities to end the crisis and enter into dialogue.

Wallace said on Thursday that he believed Moscow would “see what this is about and recognise that, you know, Europe and NATO and the West is alert to what’s going on.”