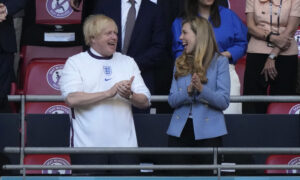 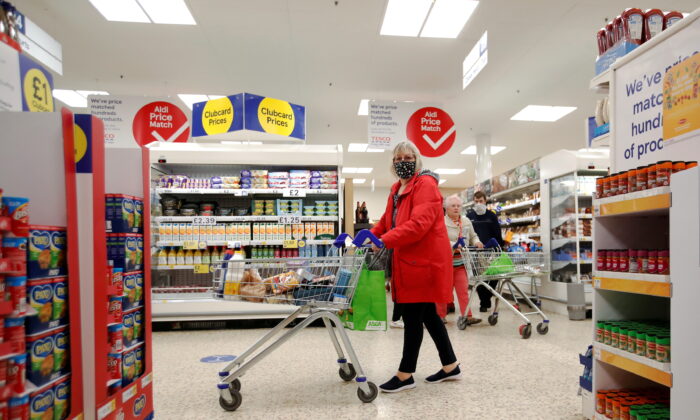 A woman wearing a mask pushes a shopping cart at a Tesco supermarket in Hatfield, United Kingdom, on Oct. 6, 2020. (Peter Cziborra/Reuters)
UK

LONDON—Britain’s biggest supermarket groups will encourage staff and customers to keep wearing face coverings from Monday despite new rules making it a matter of personal choice.

The government is removing most pandemic restrictions from July 19 in England, saying a rapid rollout of COVID-19 vaccines has largely broken the link between infections and serious illness or death.

Tesco, Sainsbury’s, Asda, and Aldi all said they would prefer staff and customers to keep wearing masks.

The groups—who are among Britain’s biggest private sector employers—said they would keep other safety measures in place, including limits on the number of people in stores, protective screens at checkouts, and regular cleaning.

“We’re asking our customers and colleagues to be on the safe side,” Tesco, Britain’s biggest supermarket group, said.

An opinion poll published on Thursday by Kantar Public found two thirds of people wanted some, most, or all of the coronavirus restrictions to remain, and 60 percent thought everyone should continue to wear masks in shops and on public transport.

Prime Minister Boris Johnson has acknowledged that a wave of infections is inevitable when restrictions end, but said worse harm would come from keeping the economy shut and pointed to the successful vaccine rollout.