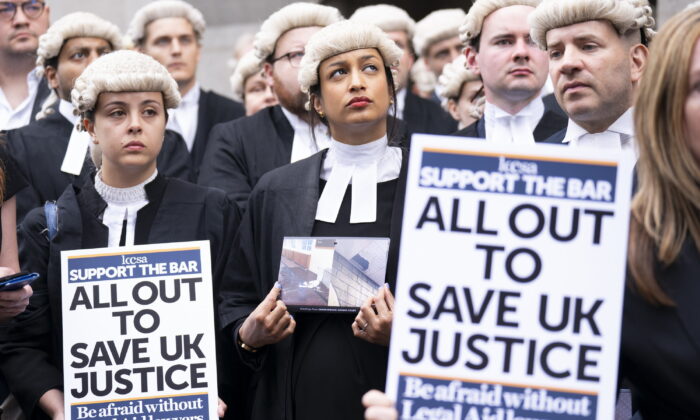 Criminal barristers from the Criminal Bar Association on the picket line outside the Old Bailey in London on July 4, 2022. (Kirsty O’Connor/PA)
UK

UK Solicitors Could Follow Barristers and Go on Strike Over Pay

The criminal justice system in England and Wales faces further disruption with criminal defence solicitors considering taking industrial action, in the wake of the strike by barristers.

The London Criminal Courts Solicitors’ Association (LCCSA) has launched a survey asking its members: “Are you content with the current proposals set out in the government’s response to CLAIR [Criminal Legal Aid Independent Review (pdf)], and the timeframe in which they intend to implement them?”

The survey goes on to ask: “If a majority of firms with legal aid contracts in the London area publicly commit to any or all of the following actions until the government agrees an immediate 25 percent increase in legal aid fees for criminal defence work, would you join them?”

Defence solicitors play a vital role in the criminal justice system. An arrested person has a right to consult with them before being interviewed and, if a person is charged with an offence, it is the solicitor who first hears that person’s defence and then has to instruct a barrister who will defend them at a crown court trial. Solicitors also represent clients directly in the magistrates courts.

‘Appetite for Bold Action’ Among Solicitors

The LCCSA said there was an “appetite for bold action” but also an “anxiety that if we down tools and further disrupt an already lumbering justice system, our contracts could be taken off us.”

But it is not just solicitors in the London area who are unhappy about their pay under the legal aid system.

The Criminal Bar Association (CBA) claimed they had disrupted 1,000 cases on Monday, the third day of their strike.

Barristers will remain on strike on Tuesday and Wednesday, with a four-day strike the following week and a five-day action on the week of July 18.

Among those cases disrupted was the trial of allegedly anti-Semitic podcaster James Allchurch at Swansea Crown Court, which has been put back until March 2023.

Jo Sidhu, the chairman of the CBA, told LBC, “We’ve had continuing discussions with the Ministry of Justice, but I’m afraid to say to you the ministers are refusing to discuss with us, to sit around the table and negotiate the way through this problem.”

The Justice Secretary, Dominic Raab, has said the barrister strike is “regrettable” and would “only delay justice for victims.”