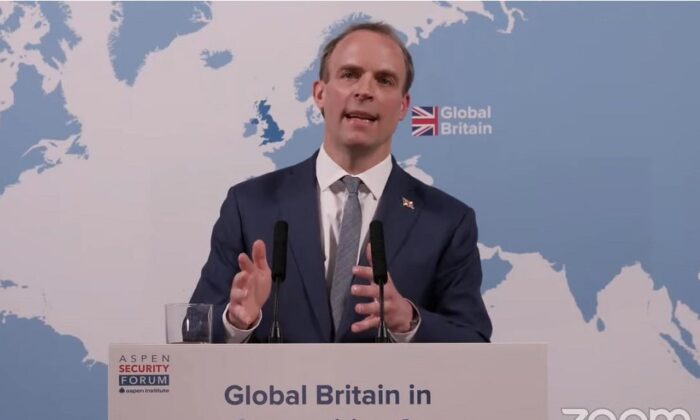 Britain on Monday announced sanctions in coordination with its Western allies against Chinese officials over the human rights abuses of Uyghur Muslims.

This is the first time the UK has targeted Chinese officials with its Magnitsky-style sanctions regime, which was adopted in July 2000.

In a statement, the Foreign, Commonwealth & Development Office (FCDO) said, “The UK will, for the first time, impose asset freezes and travel bans against four Chinese government officials, as well as a Xinjiang security body, under the UK’s Global Human Rights sanctions regime for systemic violations against Uyghurs and other minorities.”

Alongside the EU, United States and Canada, we are imposing sanctions against those responsible for the serious and systematic human rights abuses against the Uyghur Muslims in Xinjiang. https://t.co/LtmbFO6F7y

Speaking in the House of Commons, Foreign Secretary Dominic Raab said, “I can tell the House today that I’m designating four senior individuals responsible for the violations that have taken place—and persist—against the Uyghur Muslims in Xinjiang.”

“The evidence of widespread human rights abuses in Xinjiang cannot be ignored—including mass detention and surveillance, reports of torture and forced sterilisation,” Raab said in the FCDO statement.

“Working with our international partners we are imposing targeted sanctions to hold those responsible to account.”

The UK imposed sanctions on the same officials targeted by the EU.

Zhu Hailun, former secretary of Xinjiang’s Political and Legal Affairs Committee, was described by the EU as the “architect” of the “large-scale surveillance, detention, and indoctrination programme targeting Uyghurs and people from other Muslim ethnic minorities.”

In addition to implementing the mass detention programme in the XUAR, the EU said Wang is also “responsible for the XPCC’s systematic use of Uyghurs and people from other Muslim ethnic minorities as a forced workforce, in particular in cotton fields.”

The two other sanctioned individuals are Wang Mingshan, secretary of the Political and Legal Affairs Committee, who used to serve as Xinjiang’s police chief, and Chen Mingguo, the current police chief.

Apart from being directly responsible for the mass detentions, they have been linked to Xinjiang police’s “Integrated Joint Operations Platform,” a big data programme used to track millions of Uyghurs in the region and flag those deemed “potentially threatening” to be sent to detention camps, the EU said.

In addition to these individuals, the UK also sanctioned the XPCC’s Public Security Bureau, which is the policing department of the organisation.

Beijing responded to the EU by saying it had decided to impose sanctions on 10 EU individuals, including European lawmakers, the EU’s main foreign policy decision-making body known as the Political and Security Committee and two leading think-tanks in a rare escalation of diplomatic tensions.