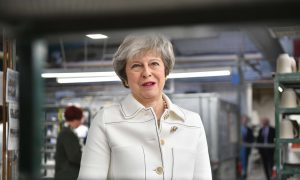 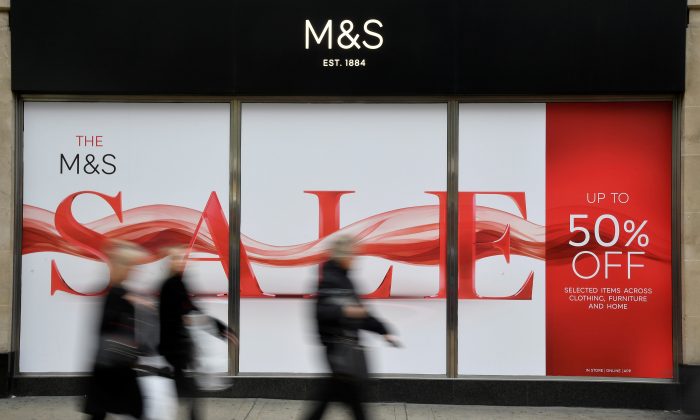 Shoppers walk past sale signs at a branch of the British clothing and food retailer Marks and Spencer on Oxford Street in London, Britain, on Jan. 3, 2019. (Toby Melville/Reuters)
UK

LONDON—British shoppers cut back on spending in the three months to December for the first time since last spring, adding to evidence of a consumer slowdown as Brexit approaches, data showed on Jan. 17.

Retail sales volumes fell 0.2 percent in the fourth quarter after a 0.2 percent rise in the three months to November, the Office for National Statistics (ONS) said.

Friday’s data chimed with other signs that consumer spending is cooling after a strong summer.

Businesses are also cutting investment before Britain’s scheduled departure from the European Union in late March, leaving the overall economy growing at a snail’s pace.

#British shoppers cut back on spending in the three months to December for the first time since last spring, adding to evidence of a #consumer slowdown as #Brexit approaches, data showed on Friday. https://t.co/2j5fLIFzoU pic.twitter.com/teUzrEFVDC

Both readings were below economists’ forecasts in a Reuters poll.

“A major concern for retailers will be that already cautious consumers further limit their spending in the near term at least due to the heightened uncertainties over Brexit,” economist Howard Archer from the EY ITEM Club consultancy said.

Sterling and British government bonds were little changed after the data.

The ONS said the value of sales fell for the first time in three years in the three months to December, underlining a squeeze on retailers’ profit margins as they battle for customers.

A survey last week from the British Retail Consortium showed retailers failed to increase Christmas sales for the first time since the depths of the global financial crisis a decade ago.

The ONS data showed a drop in sales of carpets and floor coverings, possibly reflecting a stalling housing market.

While disarray over Brexit has weighed on consumer confidence, there has been some comfort for households recently with the fastest underlying pay growth since 2008 and inflation falling to an almost two-year low of 2.1 percent.

Highlighting the easing of inflation pressures, the ONS’s measure of annual price increases in stores cooled to 0.6 percent in December from 1.3 percent in November, the smallest uptick in more than two years.

By Andy Bruce and William Schomberg