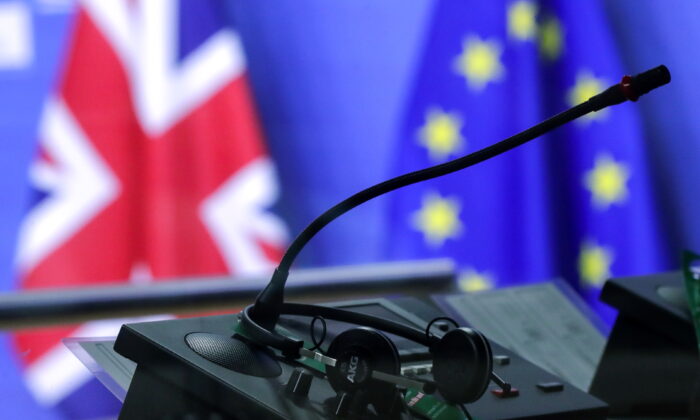 Flags of the Union Jack and European Union are seen through an interpreter's booth ahead of the meeting of European Commission President Ursula von der Leyen and British Prime Minister Boris Johnson, in Brussels on Dec. 9, 2020. (Olivier Hoslet/Pool via Reuters)
UK

LONDON—Britain is to begin replacing or scrapping EU regulations that were copied into British law before the country’s exit from the bloc, Brexit Minister David Frost said on Thursday.

To avoid uncertainty and confusion as Britain untangled itself from the EU after 40 years, the government automatically carried thousands of EU laws and regulations into British law so that they would still apply after Brexit.

“We now have the opportunity to do things differently,” Frost said in a statement.

Earlier he told Parliament’s upper chamber, the House of Lords, “I want to be clear, our intention is eventually to amend, to replace, or to repeal all that retained EU law that is not right for the UK.”

Frost cited data rights, rules on genetically modified organisms, clinical trials, and port services as examples of areas where the government planned to move away from EU regulations.

The government also said it planned to replace paper shareholding certificates with digital ones, and introduce digital driving licences.

“The government will go further and faster to create a competitive, high-standards regulatory environment which supports innovation and growth across the UK,” Frost said.

By Kylie MacLellan and Elizabeth Piper